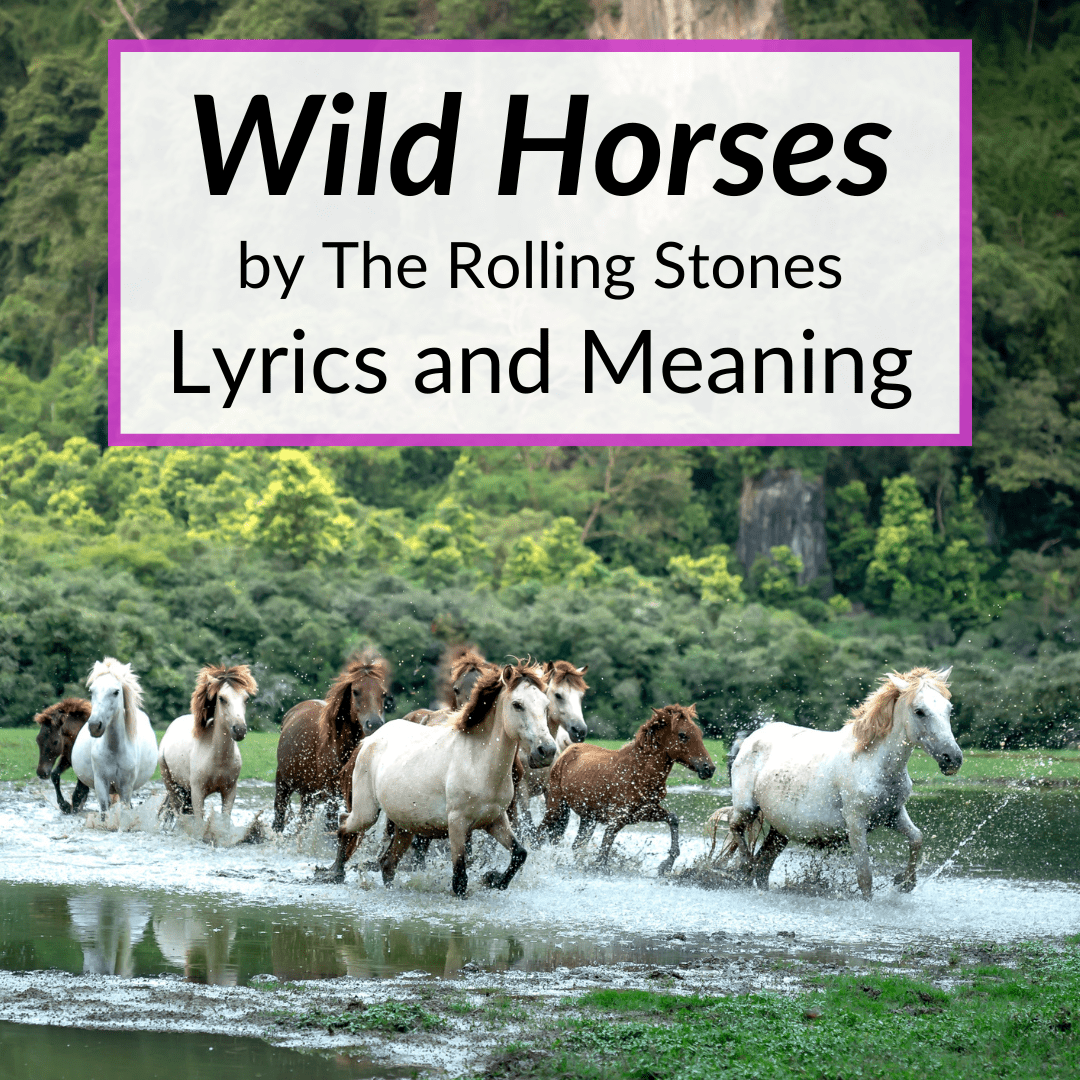 You probably already know this.

Wild Horses is not about wild horses.

Nor is it about Mick Jagger’s relationship with Marianne Faithfull, as so many mistakenly believe.

Jagger himself has said the lyrics are not about that.

That said, it is likely that the end of that relationship had some influence on him when writing this song.

So what is the Wild Horses lyrics meaning then?

Keep reading to learn all about it. We’ll give you the lyrics in full and tell you what they are actually about.

Wild Horses was first penned in 1969 and featured on The Rolling Stones’ 1971 album, Sticky Fingers. However, the song’s first public release was in 1970, when it appeared on The Flying Burrito Brothers’ album Burrito Deluxe.

The song was written by Keith Richards and Mick Jagger, as so many of The Rollings Stones’ hits were. Richards recalls: “If there is a classic way of Mick and me working together this is it. I had the riff and chorus line, Mick got stuck into the verses.”

Wild Horses was released as The Rolling Stones’ second US-only single in June 1971, and it peaked at number 28 on the Billboard Hot 100 chart.

Many people think the song is about Mick Jagger’s on-off relationship with Marianne Faithfull.

However, Jagger recalls “Everyone always says this was written about Marianne but I don’t think it was; that was all well over by then. But I was definitely very inside this piece emotionally.”

Keith Richards, who had just become a father for the first time, once said of the song, “it was about the usual thing of not wanting to be on the road, being a million miles from where you want to be.”

When Richards first started putting the song together, he was regretting the fact that the band were about to head out on the road to promote the new album, and he would have to leave his newborn son behind.

Let’s look at the lyrics in full, before getting into our breakdown of their meaning.

Childhood living is easy to do
The things you wanted, I bought them for you
Graceless lady, you know who I am
You know I can’t let you slide through my hands

I watched you suffer a dull, aching pain
Now you decided to show me the same
No sweeping exits or offstage lines
Could make me feel bitter or treat you unkind

I know I dreamed you a sin and a lie
I have my freedom, but I don’t have much time
Faith has been broken, tears must be cried
Let’s do some living after we die

Keith Richards wrote the music using minor chords and a 12-string acoustic guitar, to help give the song its infamous melancholic feel.

Jagger then completed the lyrics, which obscured the original meaning that Richards had intended for the song. The song became about two people who have been together for awhile, but whose relationship is beginning to peter out.

The song has given comfort to many people facing the impending end of a relationship, with lyrics such as “Faith has been broken, tears must be cried” resonating with the listener.

The line “No sweeping exit or offstage lines, could make me feel bitter, or treat you unkind,” shows Jagger feeling vulnerable and wishing to end the relationship amicably, a feeling many have experienced as a relationship ends.

The song Wild Horses serves as a gentle reminder to us all that life must carry on, despite the fact that we all go through relationship burnout, get tired, and suffer the heartbreak of losing a loved one.

Life must go on, and this sentiment is conveyed in the song’s final line, “Wild, wild horses,
we’ll ride them some day.”

Wild Horses by The Rolling Stones is about the impending end to a relationship. The song has given comfort to many people over the years whose relationship was ending.

Completely opposite of that is The Police’s biggest hit. It is about a man who imagines a relationship with a woman and stalks her. Learn more in our article on the Every Breath You Take lyrics meaning.