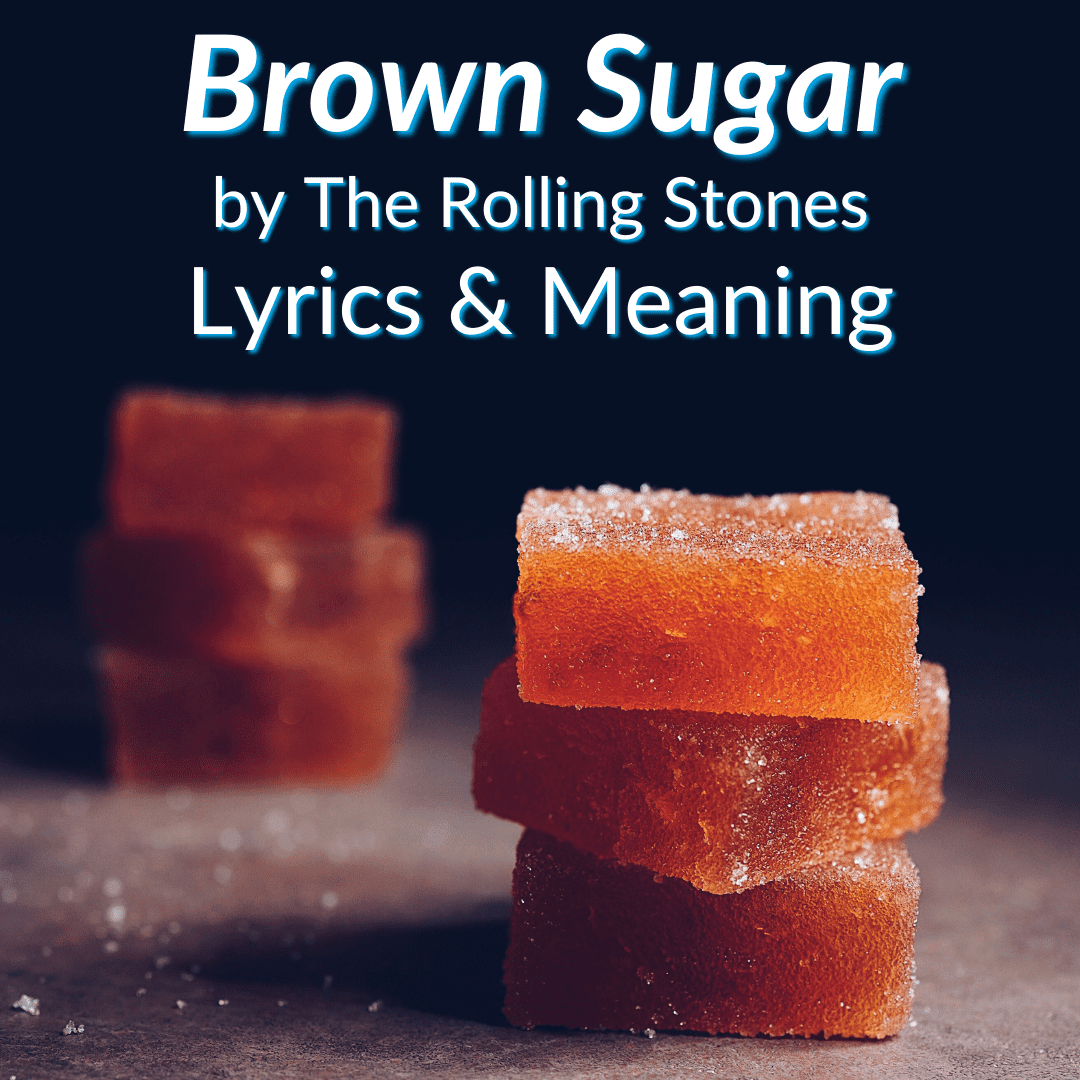 Apparently they’re not sure why themselves. They just know they had to do it in today’s climate.

I’ve included a video of them performing the song live below so you can see what you’re missing.

Why did they have to stop performing this song?

Because in today’s world, too many people are all too happy to misinterpret the Brown Sugar lyrics meaning, in order to give themselves something to be upset about.

And that leads many other to get the wrong idea about the song and the band.

Mick Jagger is not endorsing slavery. He is singing about the horrors of slavery and being highly critical of it. Obviously.

Keep reading to learn exactly what The Rolling Stones are singing about in this song. Yes it involves slavery. And women and drugs. Because it’s the Stones.

Brown Sugar is a song recorded by the English rock band The Rolling Stones. It is the opening track and lead single from their 1971 album Sticky Fingers. The song topped the charts in both the US and in Canada, and it also reached number 2 in the United Kingdom and in Ireland.

We will now look at the lyrics in full, before going into their meaning. And hopefully clearing up the confusion and any misunderstandings.

Ah, and I bet your mama was a tent show queen
And all her boyfriends were sweet sixteen
I’m no schoolboy, but I know what I like
You shoulda heard me just around midnight

Brown sugar, how come you taste so good, baby?
Ah, come down, brown sugar
Just like a young girl should, yeah

Though credited to “Jagger–Richards,” Brown Sugar was primarily the work of The Rolling Stones frontman Mick Jagger, and there is some dispute as to who Jagger’s muse was when he composed the song’s lyrics.

Two of Jagger’s former lovers, American actress Marsha Hunt and former Ikette Claudia Lennear, have both claimed that the song’s lyrics were inspired by them.

To clear things up a little, Bill Wyman wrote in his 2002 book Rolling With The Stones that the lyrics were at least partially inspired by Lennear.

The song’s lyrics are believed to deal with the history, morality, and dynamics of sex between a white male and a black female, and how it has been influenced by power and status.

In addition to themes of racial exploitation and sexual depravity, the song’s title is seen as a less-than-subtle reference to the opioid drug heroin.

On first hearing the song, it’s clear that it’s mostly about the slave trade, with black women being bought, sold, and whipped by a slave master. Further and closer listening to the lyrics reveal that Brown Sugar is a song about slavery.

The opening lines, “Gold Coast slave ship bound for cotton fields sold in the market down in New Orleans,” openly refer to the buying and selling of slaves.

The verse’s next lines, “Scarred old slaver knows he’s doing alright, hear him whip the women just around midnight,” depict a slave driver whipping a group of the female slaves.

These lyrics are clearly about African women being sold into slavery on southern plantations and forced to engage in non-consensual sex with their masters.

Brown Sugar’s chorus is all about how a young girl should taste. The term “brown sugar,” as has often been pointed out, is slang for heroin whilst also being disguised as a term of endearment for a black lover.

Mick Jagger himself stated “The lyrics were all to do with the dual combination of drugs and girls.”

The second and third verses both echo the sentiments of the first verse, with the themes of sex and power still evident. In recent times, these themes and allusions to black women being raped have drawn a backlash, with the band not playing the song during their seemingly ironically named “No Filter” tour in 2021.

On the decision to remove the popular song from their set-list, Keith Richards said, “I don’t know. I’m trying to figure out with the sisters quite where the beef is. Didn’t they understand this was a song about the horrors of slavery? But they’re trying to bury it.”

Despite their allusion to slavery, Brown Sugar’s lyrics were not written as an endorsement of slavery or sexual exploitation. Quite the opposite, in fact.

It is a shame that The Rolling Stones had to stop performing Brown Sugar live, because a small minority of people choose to misunderstand their lyrics. But that is the world we live in.

Hopefully we could help clear up the confusion. This song was always meant to depict the horrors of slavery. Along with the wonders of sex and drugs, of course. Because it’s The Rolling Stones.

If you enjoyed this breakdown, we took a similar look at the Paint It Black lyrics meaning and the lyrics and meaning of Wild Horses.