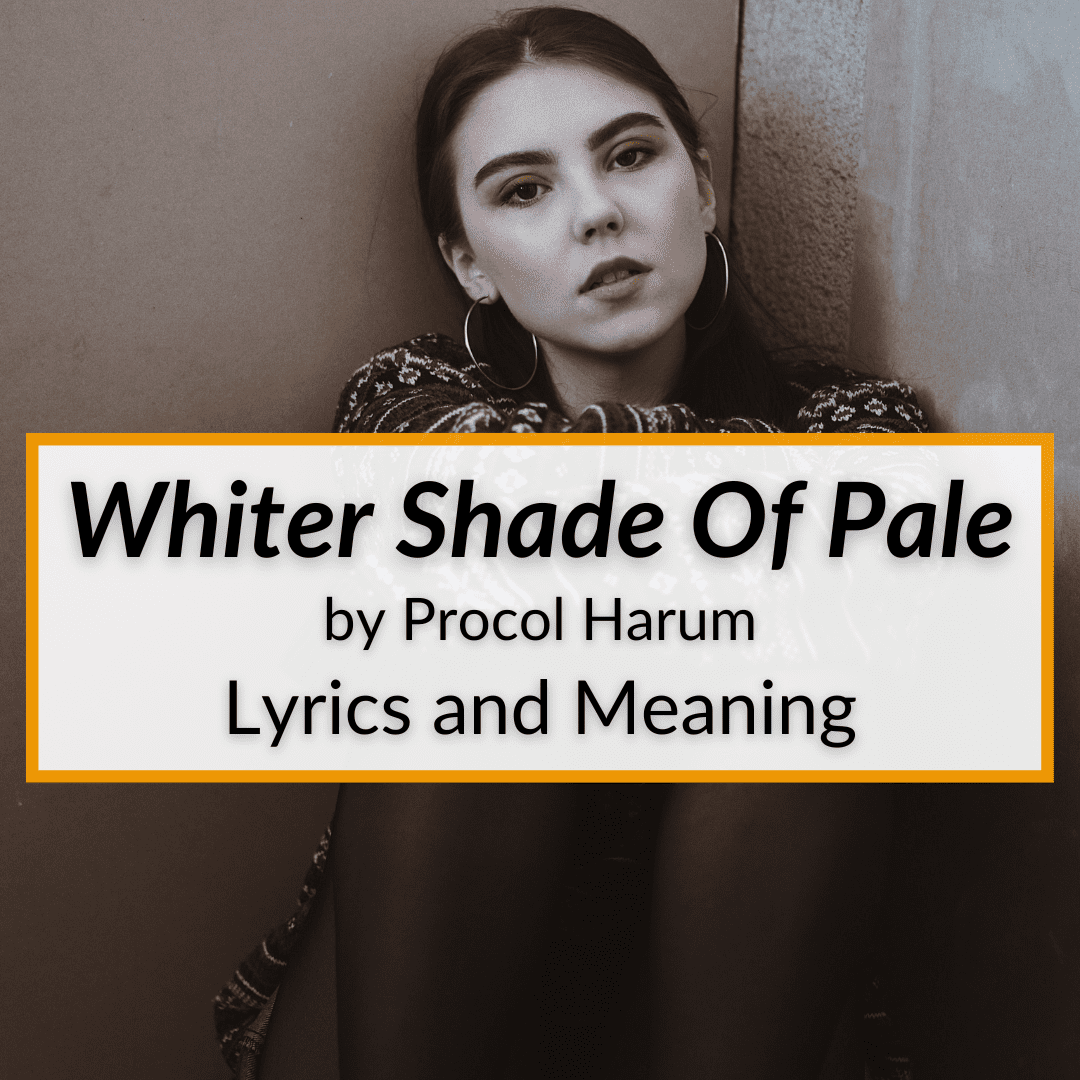 Whiter Shade Of Pale was one of the main anthems of the Summer of Love (1967).

And it continued to enjoy popularity long after that. In fact, it is one of the most commercially successful singles of all time.

Most understand the Whiter Shade Of Pale lyrics meaning to be about a couple at a party that ends up having sex. Why not? It was the summer of love, after all.

But the songwriter himself has denied this interpretation.

The song does take place at a party.

But the couple in the song do not end up together.

Keep reading to learn exactly what the song Whiter Shade Of Pale is about. What happens to the young couple in the song?

Whiter Shade of Pale was the first song written and released by the UK band Procol Harum in 1967. The lyrics of the song were written by Keith Reid. He actually overheard the phrase “whiter shade of pale” at a party and it stuck with him. So much so that he used it to inspire this song.

There is a lot of confusion circling around the meaning of this song. Most of the debate comes from the use of some mythological references that have made the meaning of the song murky. Most listeners tend to believe it is about a young man seducing a woman at a party, and they end up having sex.

However, Keith Reid has gone on record and negated this theory. He said he wrote this song to describe a very simple story of a boy who falls too hard for a girl he barely knows and is then rejected by that girl. Nothing more and nothing less.

One thing that everyone can agree on though is that the couple in the song are drunk and that the events that unfold do so at a party. But there is a lot more to it than that. Let’s look at the lyrics first, before getting deeper into the meaning.

And so it was that later
As the miller told his tale
That her face, at first just ghostly
Turned a whiter shade of pale

She said, there is no reason
And the truth is plain to see
But I wandered through my playing cards
And would not let her be
One of sixteen vestal virgins
Who were leaving for the coast
And although my eyes were open
They might have just as well’ve been closed

She said, ‘I’m home on shore leave,’
Though in truth we were at sea
So I took her by the looking glass
And forced her to agree
Saying, ‘You must be the mermaid
Who took Neptune for a ride.’
But she smiled at me so sadly
That my anger straightway died

We will take a closer look at the key lines in the song. These give us clues as to the intended meaning, in addition to the explanations Keith Reid himself has supplied.

We skipped the light fandango
Turned cartwheels ‘cross the floor

The opening line sets the start of the scene. The fandango is a dance. Everyone is having fun and enjoying life. There is a carefree feeling to this lyric. We can also assume that the subjects of the song are young and perhaps a little naive.

The room was humming harder
As the ceiling flew away

These lines show that the man and woman in the song are quite drunk. They are several drinks in and are seemingly having a great time. They are in a crowded place, full of people, but are spending the party together.

This line confirms the number of drinks this young couple is consuming. Despite already being drunk, they are choosing to carry on partying and keep drinking. The reference to a tray implies they are drinking more than one drink at a time.

Some fans have said this line is related to a sexual escapade gone wrong. However, since Keith Reid has adamantly denied that claim, this may just be a simple reference to a drunk man speaking his truth.

The miller is likely a reference to The Miller’s Tale which is the second story from Geoffrey Chaucer’s Canterbury Tales.

The man in the song is very drunk and took that opportunity to tell the girl he was with his true feelings for her. Most likely, this was the first time he made this admission.

Or they simply didn’t know each other very well yet, and what he was saying was inappropriate. Based on the next lines in the song, she didn’t agree with whatever this man said to her.

That her face, at first just ghostly
Turned a whiter shade of pale

She was so taken aback by what the man was saying to her she turned pale. This implies she is uncomfortable with the situation. She is having a conversation she doesn’t want to have.

She also doesn’t share the same feelings as her drunken partner. People also turn pale when they feel sick, so a secondary interpretation could be that whatever he said made her so upset she began to feel physically ill.

She said “there is no reason”

This line confirms her objection to the conversation. She rejected the man she is with and doesn’t supply a reason why.

These lines reference that he is trying to change her mind. He knows he is being rejected, but he is running through his deck of excuses and pleadings in his head to convince her to stay with him.

His efforts are not successful, but he continues to try. He doesn’t want the girl to leave him, but deep down he knows there is nothing he can do to change her feelings toward him.

Whiter Shade Of Pale by Procol Harum is about a young couple at a party. They are drinking and dancing and having a great time. So much so that the young man falls hard for the woman and makes a move. But he is rejected.

However, ever since the song was first released, listeners have favored a different interpretation. They believe the young man in questions does not give up and eventually managed to convince the woman to have sex with him.

That people would prefer that interpretation makes sense, given the song’s status as an anthem of the summer of love. But in today’s climate, the young man in question should accept a “no” as a “no”, and not take it as a “try harder”.

For a completely different song with a similar theme, but one where sex is much more at the forefront, take a look at out analysis of the lyrics and meaning of Poker Face by Lady Gaga.