If you’ve seen a lot of live shows, chances are you’ve seen the Sennheiser e945 microphone in action plenty of times.

It is a favorite among professional musicians and has developed a reputation as being tough and durable; as a mic that can withstand even the roughest touring schedule and that can survive the drops and bumps that come with a live performance.

Is that reputation justified?

More importantly, is that all this microphone has to offer?

As a dynamic microphone, is the sound quality up to par? Do performers rely on it solely because it can handle rough treatment, or does it also help them sound their best?

Let’s take a closer look at the Sennheiser e945 in this review and answer those questions and more.

Every performing singer should have a solid dynamic microphone, both for studio and live work. Although there are countless dynamic mics out there, it’s not always easy to find the best one for your specific needs.

With this in mind, we wanted to take a closer look at Sennheiser’s e945, because it is one of the best dynamic vocal mics in its price range.

The first thing you’ll notice is the overall robust build. Like many of the mid- to high-end dynamic mics, it’s designed to withstand the rougher handling that is common during live performances.

But Sennheiser went above and beyond. The e945 is famous for its durability.

The capsule, one of the most critical elements, is shock-mounted. This protects it, providing safe and reliable operation during even the roughest handling. It does result in more weight, making the e945 heavier than other similar mics.

As for performance, the microphone picks up all frequencies from 40 Hz up to 18 kHz. But looking at the frequency curve, it’s not exactly flat. There are some cuts to the low-end and the very high-end of the spectrum.

In addition, there’s a slight boost in the mid- and higher mid-frequency range. And this is exactly what you need with a dynamic super-cardioid microphone intended for live performances. Overall, this is one of the best options for any experienced lead or backing vocalist.

As already mentioned, one of the most notable and useful features of the Sennheiser e945 is its construction. The casing is fully made of metal and is specially designed for rough handling. This results in a slightly heavier weight of 365 grams or around 0.8 pounds. But this is actually not that bad, as it’s just slightly above the average weight for dynamic mics that vocalists use on stage.

Reliable For Live Settings And Tours 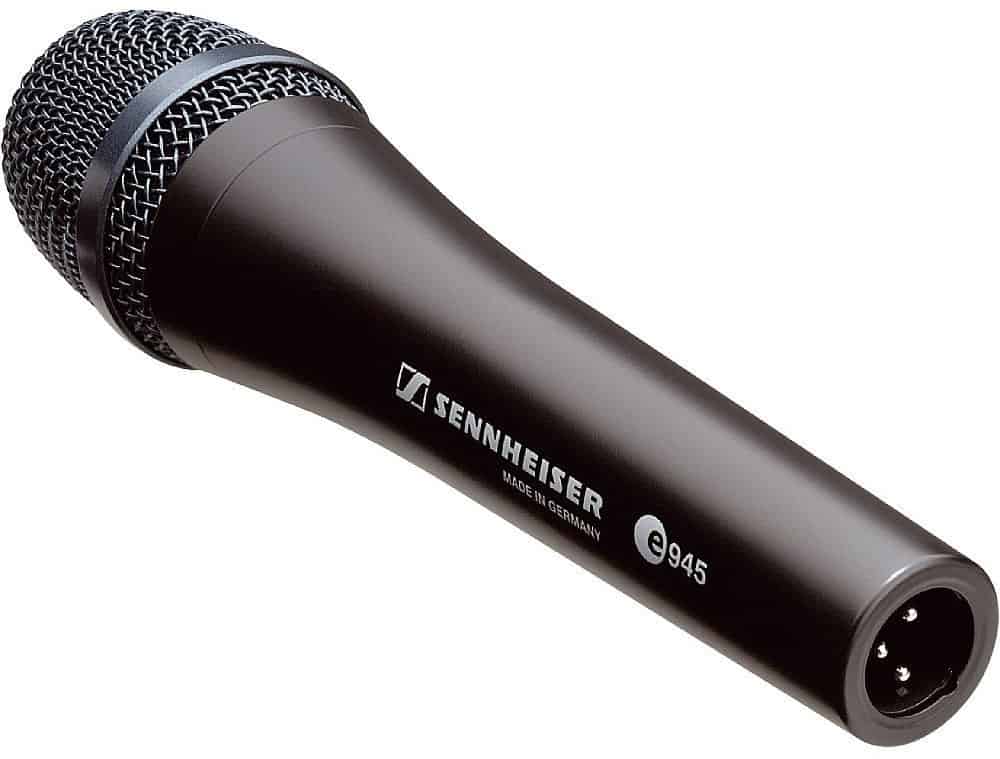 Speaking of the overall construction, there are a number of design features that make the Sennheiser e945 capable of withstanding for rough handling, which is vital for touring live performers.

First off  is the afore-mentioned shock-mounted capsule. Even if the microphone slips out of your hands, it will keep working without any issues. It can withstand rough impacts and this feature even helps it with handling very loud noises.

Another feature that makes it so reliable is the neodymium ferrous magnet with boron in it. This makes the mic more resistant to extremes like drastic oscillations in temperature and humidity.

Finally, the e945 also has a falcon ring that enables reliable and consistent operation in the long run.

The frequency range of 40 Hz up to 18,000 Hz is great, but it would mean nothing if this microphone didn’t have a specially designed response over the spectrum. Of course, many microphones go lower, but those are mean for the studio.

You don’t need those low ends below 40 Hz on live stages with powerful PA systems and monitoring. That is why most of the lower end up to somewhere between 100 and 150 Hz is also significantly reduced.

Going up higher, we have a slight boost above 2000 Hz, all the way to 6,000 Hz. There’s another peak in the area between 10 and 12 kHz, after which it steeply drops at 18 kHz, which is this mic’s maximum. Such an uneven distribution of frequency response makes it a great live mic for very loud settings, even for some percusaion and other instruments.

Another important feature is the super-cardioid pickup pattern. This pattern mean that it picks up sounds that come from the front, and not from other directions, which is exactly what you want in a live vocal mic.

What’s more, the distribution of some low-end and high-end frequencies is restricted, so that the mic picks these up mostly in close proximity. This is the most important of its many sonic feature, and one that makes it especially suitable for live settings.

With this type of frequency response and distribution, you do not have to worry about unwanted feedback, even if you’re walking all around the stage while you sing. With the proper setup, no instruments will “bleed” into the vocal mix.

The frequency curve somewhat resembles Shure’s SM58 and SM57. This means that the Sennheiser e945 can be a handy mic for some instruments as well, most notably snare drums and guitar amplifiers.

There are many other Sennheiser microphones that are naturally compared to this one. It’s mostly the mics from the 900 series, like the e935. However, it’s not unusual to see vocalists having a difficult time deciding between the e945 and the e845 or other mics from the 800 series. Here, we’ll look more into these three microphones and see how different they are.

To put it simply, the e935 is a more modest and affordable version of the e945. They both feature an almost identical casing, designed for rough on-stage handling. They’re even roughly the same weight, with the e935 just 10 grams lighter.

They also have the same polar pattern and frequency response. Both are super-cardioid mics that pick up anything from 40 Hz to 18 kHz. However, the distribution of frequencies along this spectrum is a little different.

We could say that the e945 is just a bit more “focused,” due to the filtered out frequencies in the pickup pattern. The e945 is also more focused on picking up sounds right in front of it, because the super-cardioid shape is more “narrow” than the one of the e935.

In addition, it also features more noise cancellation due to its hum-compensating coil. If you’re an intermediate musician that performs occasionally, you’ll be fine with e935. It is also a great mic and you can save some money. If you’re a more experienced vocalist with a heavier performance schedule, you should get the e945 instead.

The Sennheiser e845 is an even more cost-friendly option. Despite an almost identical build and a very similar super-cardioid polar pattern, the e845 has a slightly narrower frequency range, covering between 40 Hz and 16 kHz.

The distribution of frequencies is also different, with a slightly higher boost between 4 and 5 kHz, and no boost from 10 to 12 kHz. It also includes similar noise and feedback reduction attributes as the e945, but they arer not as advanced.

The e945 is easily the best of these 3 mics and the one we recommend if you can afford it. If you are on more of a busget, the e935 is the next best option and the e845 and e835 come in at third and fourth, respectively. All are great mics, but the more you pay, the higher the quality. As always.

You can find the Sennheiser e935 here on Amazon. The e845 can be found here.

Of course, it is impossible to avoid comparison with Shure’s 58 mics, most notably the Beta 58A. It has the same use (live singing) and a similar reputation for toughness.

This should be no surprise, since the 58A also has a shock-mounted capsule and an overall design made to resist rough handling. However, the Shure Beta 58A is significantly lighter, which may be an advantage to some live performers.

The 58A has a narrower frequency response, picking up frequencies between 50 Hz and 16 kHz. The distribution of frequencies is similar to the e945, but there are some distinctions.

The low end on the Shure mic is more cut off, though it can get a significant boost at close proximity to the mic, at least compared to the Sennheiser mic. There’s also a slight difference in the higher register, where the 58A provides just a little bit more high-end tones.

This is the primary reason some singers might prefer it over the e945. Although it’s not a common complaint, some vocalists bemoan the lack of brightness and crispiness with the 900 series of Sennheiser mics, despite them going up to 18 kHz.

What’s more, the 58A is significantly cheaper than the Sennheiser e945. In the end, it is this that makes it the more popular option among many performing vocalists, even professionals. The Sennheiser is better overall, but the Shure is probably a better value.

Check out the Shure Beta 58A on Amazon.

If you’re a frequently performing vocalist, you  can’t go wrong with the Sennheiser e945. It has proven to handle extensive touring with flying colors, which is why many professionals rely on it.

The primary drawback is the higher price, but it really isn’t that much higher. That said, if it is out of your budget, then the Shure Beta 58A would be a great choice as well. Unless you are a very experienced musician, you are unlikely to notice much of a difference between the two.

Sennheiser’s lower cost dynamic mics, like the e935 and the e845 are great alternatives as well. But if you are looking for the best mic for live vocals, the e945 is it. That is why we give it a top Musicaroo rating of 5 out of 5.