These are exciting times.

You’ve got tons of great inexpensive solid state guitar amplifiers to choose from that have integrated digital amp modeling units.

These amp modeling units allow you to recreate the tones of many different tube-driven amplifiers and they even give you some of the same warmth and dynamic response.

One of our favorites is the Peavey Vypyr VIP 2.

It obviously doesn’t sound exactly like any expensive tube amps, but it comes close and costs far less. Plus it can imitate many different models, not just one.

It has a lot of other great features too, We consider it the best budget electric guitar amp. Read the rest of this review to find out everything it offers.

The Peavey Vypyr VIP 2 is a powerful amp, considering the low price. With 40 watts of power, it is more than enough for a smaller or mid-sized live gig.

It drives its output through one simple 12-inch speaker. It also has an auxiliary input and a headphone output on its front panel. It has tons of effects and presets and can be used for basses and acoustic guitars, in addition to electric guitars. 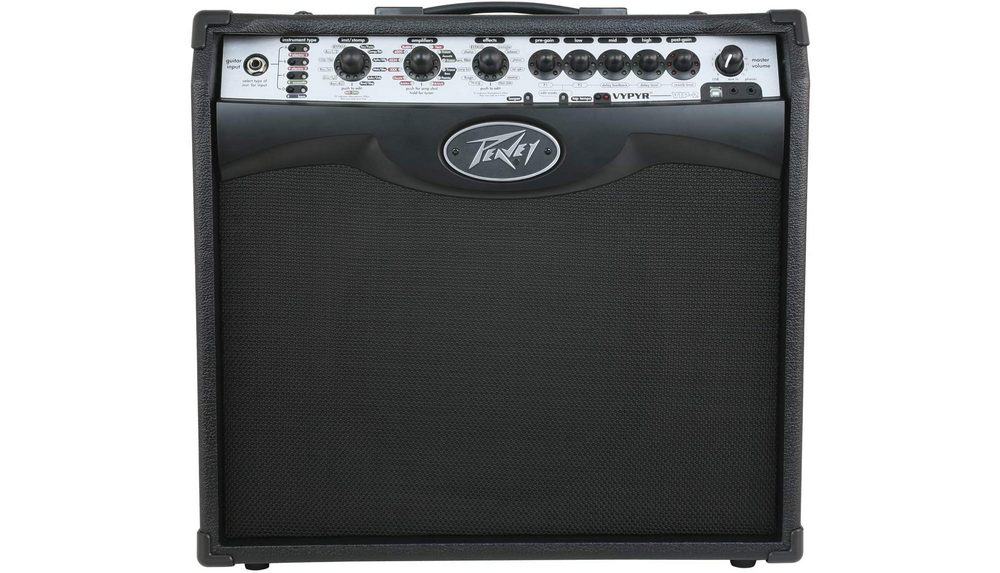 The Vypyr VIP 2 is far from a pro-level amp, but it sounds pretty great for the price and has some incredibly useful features. You’ll have a great time with it if you’re into amps that can give you a lot of different tones.

As mentioned, Peavey’s Vypyr VIP 2 drives 40 watts of output power through a simple 12-inch speaker. That’s a lot of power for such a compact and inexpensive amplifier.

But the biggest advantage is its powerful processing capacity. This relatively compact combo comes with 36 digital amp models, many of which very convincingly recreate tones of some classic tube-driven amplifiers.

This is all thanks to a special ingredient: the company’s amazing TransTube technology, which takes amp modeling to a new level. The amp is also packed with 25 different guitar effects for further tone shaping, and you can use up to 4 effects simultaneously on it.

Not only that, the VIP 2 also features digital instrument models, meaning that you can turn your standard electric guitar into an acoustic or a 12-string guitar. All of the digital processing is done through 32-bit SHARC processors. And things don’t end there. This electric guitar amplifier can work with acoustic or bass guitars as well. This makes it a fairly useful choice if you also own either of those instruments. What’s more, the Peavey Vypyr VIP 2 comes with an integrated audio interface.

This means that you can connect it to your computer using a simple USB cable and record your playing in real-time using any standard DAW of your choice. There’s also an option to create presets, either on your computer or on the amp itself, and save up to 16 different presets that you can call up at any time.

Peavey’s Vypyr series is far from the only one that combines solid-state and digital amp modeling technology. One of the most famous companies that developed this concept is Line 6.

Their Spider series is now into its fifth generation, and it includes a pretty exciting 20-watt version called the Spider V 20. In many ways, it’s  similar to the Peavey Vypyr VIP 2, primarily because they’re in the same price category. So how do these two rivals compare? Looking at the Line 6 amp, we have a simplified front panel with basic tone-shaping controls. Aside from having 20 watts of power and an 8-inch speaker, another important difference is that it comes with a tone knob instead of a 3-band EQ like the Peavey Vypyr. However, with its potent amp modeling features, you’ll be able to overcome this simplified layout and create some diverse tones.

The Spider V series actually has more options for preset-making than the Vypyr. This little bad boy has 78 different amp models, 24 different cabinet emulations, and even 4 different microphones, all of which can be combined to create a vast array of different tones. You can also pack your unique tones into over 200 presets that can be called up at any time.

Also like the Peavey, this amp comes with a full-range speaker system. This means that you can plug in a bass or an acoustic guitar as well, making it a very potent multi-purpose device. There’s also a “Classic Speaker” mode that completely shuts off the high-range driver and leaves the amp working organically like any regular solid-state guitar amplifier.

While smaller, Line 6’s Spider V 20 is a great little amp and a worthy rival of Peavey’s Vypyr VIP 2. It even outdoes it in some areas, like the number of amp models. But it’s obviously not nearly as powerful, with only half the wattage.

It’s hard to say which one is better. Both amps are capable of delivering some pretty great tones and both feature integrated audio interfaces. I you want more amp models, go with the Spider. If you need something capable of handling a live gig, then we recommend the Peavey Vypyr VIP 2.

Is digital amp modeling capable of replicating the tones of tube amps? That is a common discussion among guitarists. Whichever side of the debate you fall on, there is no doubt that the Peavey Vypyr VIP 2 manages to emulate tube amp tones surprisingly well considering the price.

Sure, it’s not always completely true to the original sound, which should be obvious considering the price, but it does a good job with most of the models. You get a lot of great different tones from a single, inexpensive amp.

While this amp is mostly aimed for intermediate players, it can also come in handy for more experienced guitarists, if they need something compact and portable for smaller live gigs. Overall, we give it a Musicaroo rating of 4.2 out of 5.