In the past, a limited budget meant huge sacrifices in how your guitar sounds.

These days, we’re much better off.

Most beginner guitar amps are still pretty useless, but nowadays, we thankfully have a few great inexpensive options.

And the Line 6 Spider V20 tops them all. It is the best electric guitar amp for beginners.

As a solid-state guitar amplifier with an integrated digital modeling amp unit, it is incredibly versatile. It can emulate the tones of 78 different guitar amps, along with speaker cabinets and microphones. It also works for bass guitars and acoustic guitars.

This review takes a closer look at this little bad boy to see what it can do.

Line 6 has a whole series of Spider amps. The V 20 model, as the name might suggest, delivers 20 watts of output power. It drives through a simple 8-inch guitar speaker, as well as an additional full-range speaker system.

Since this is a solid-state amp with digital modeling capabilities, this addition makes the amp emulation more convincing. It also makes it possible for you to plug in a bass guitar or an acoustic guitar with a piezo pickup.

You can also turn it off and use it as a regular electric guitar amp with a simple clean channel. This is one of its most interesting features, fusing old school and modern concepts in one device. While the Spider series amplifiers are far from professional grade, they are incredibly versatile and work great for any genre that comes to mind. Sure, some of the presets don’t sound much like the actual amps they’re replicating, but most are pretty good.

Overall, it is a great choice for a beginning guitarist and worth far more than its price. And while it is primarily meant for beginners and intermediate players, it can also be handy for more experienced guitarists, for smaller gigs or as a practice amplifier.

The biggest advantage of this little amp is its versatility and huge potential in tone shaping. And we really wouldn’t expect anything less from Line 6, the company responsible for huge breakthroughs in the field of digital amp modeling.

The Spider V 20 comes with 78 different guitar amp models, 24 speaker cabinet emulators, and even 4 different microphone emulations. You can combine these in multiple ways to create your own presets to go along with the over 100 effects included with the amp. It also comes with over 200 integrated presets to play around with. It has a USB connection that lets you create presets more easily. It also allows you to use the amp as an audio interface and record music in a real-time setting on your computer. It works with Windows, Mac, iOS, and Android devices.

Apart from the USB connector, the V 20 has all the basic control knobs on its front panel. This includes the standard volume knob accompanied by drive, tone, reverb, and effects parameter levels. There’s also an additional switch for choosing this amp’s basic modes of operation. Technically, this is a single-channel guitar amp. As mentioned, there are a ton of solid-state amps with digital modeling capabilities, but most just aren’t very good. While the Spider V 20 is our favorite for beginning guitarists, it is not the only one we recommend.

The Fender Mustang LT-25 is another great option that we voted our favorite guitar amp under $200. It is quite similar in terms of digital amp modeling capabilities and even has the same speaker size of 8 inches. The two amps cost around the same, too.

So how do they differ? 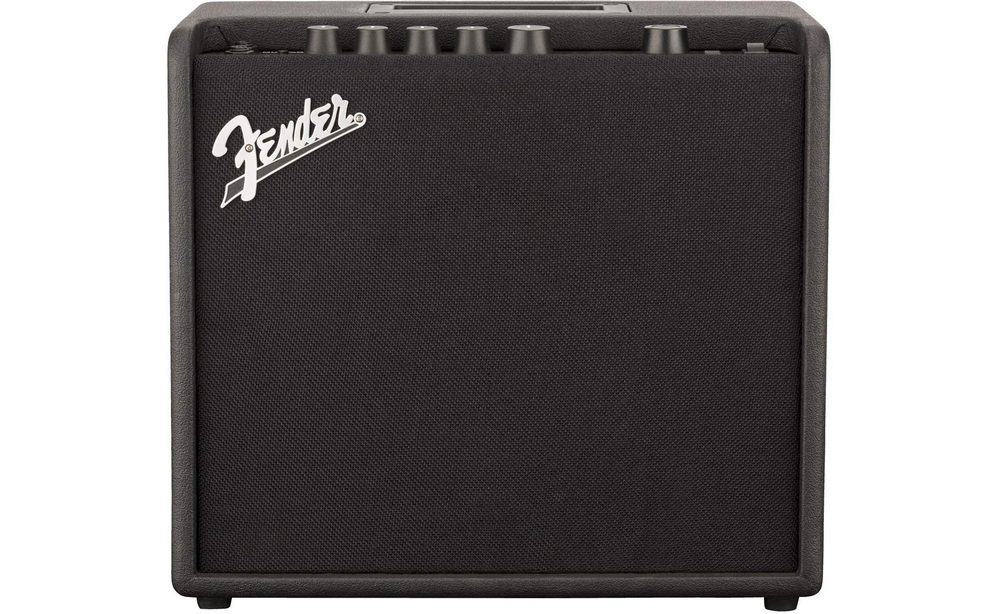 While the LT-25 has the same basic controls and features as the Spider V 20, its integrated digital processor is different and not as versatile as the Spider V series. It has fewer amp models, effects, presets, and no microphone models at all.

On the other hand, the tone you can create with the Fender model is of roughly the same quality as the Line 6 model. You just don’t have as many integrated presets and amp models. However, Fender does include models that replicating some of the classic tones of their own vintage amps, which is an interesting addition and obviously makes a lot of sense.

Both the Line 6 Spider V 20 and the Fender Mustang LT-25 are roughly in the same price and quality category. The Fender amp is a bit more expensive and a bit less versatile, but it really comes down to personal preference. You really can’t go wrong with either of these two at this budget price range.

Learn more in our complete review of the Fender Mustang LT-25.

If you need a small and simple amp that’s capable of delivering a lot of different types of tones, the Line 6 Spider V 20 is a great option. It is our favorite amplifier for beginning electric guitarists.

While the market has been flooded with cheap solid-state amps in recent years, only a few really stand out and the Spider series is near the top of that list. It shines with an incredible number of different amp, speaker cabinet and mic emulators, plus tons of effects, presets and tone shaping options.

Given the price, you obviously can’t expect professional-level sound quality here. Not even close. But that’s not what a beginner needs anyway. You need a solid reliable amplifier that sells for a low price and gives you tons of flexibility in experimenting with different tones.

This amp from Line 6 offers that. It gives you far more value for your money than you could ever expect and that results in a Musicaroo rating of 4.2 out of 5.