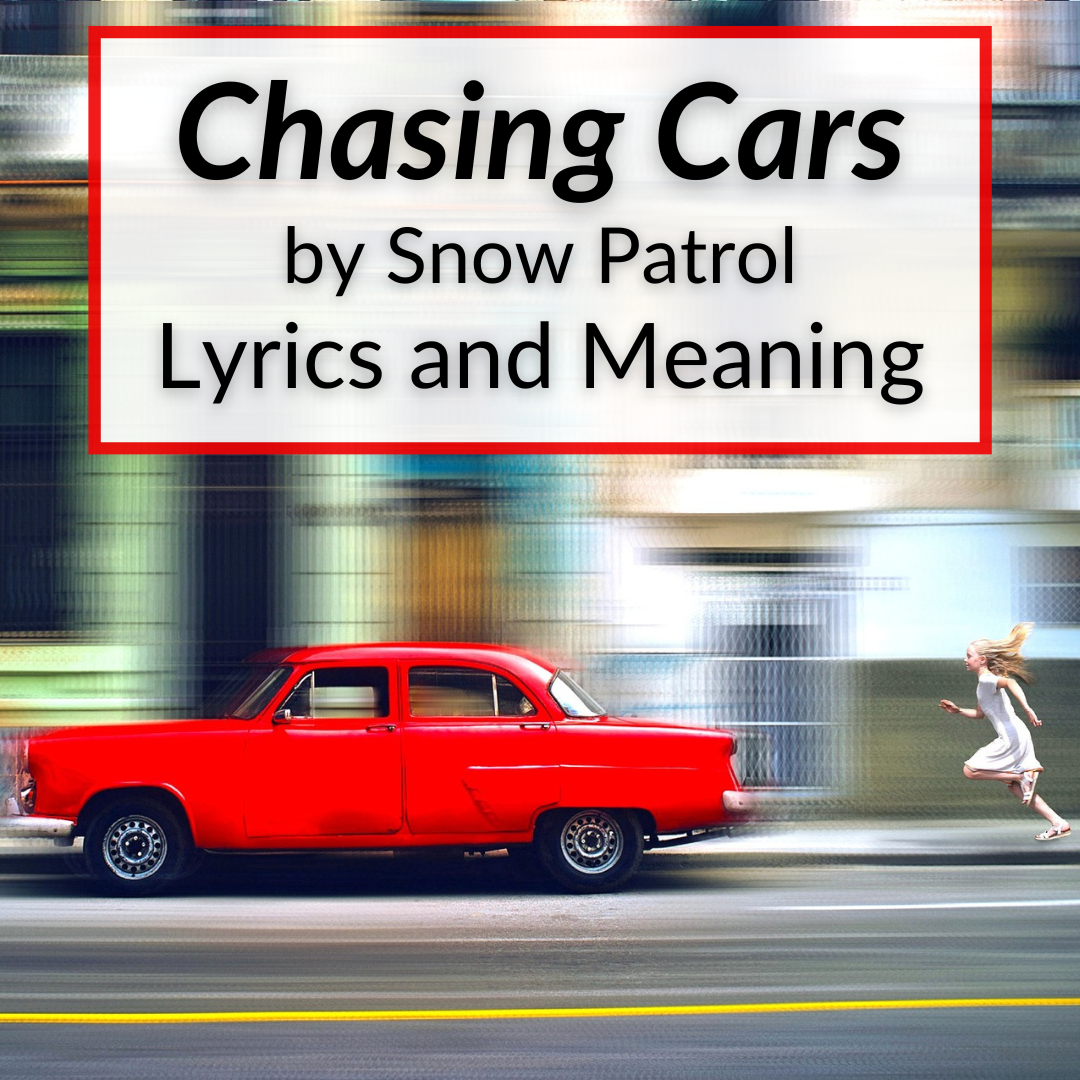 Obviously, Snow Patrol wrote this song for the dogs in their lives.

It’s still the third most popular song ever in the canine community, right after Sniffing Butts and Barking at the Wind.

Ok, so maybe it’s not for dogs. Or even about dogs.

But the Chasing Cars lyrics meaning does have something to do with dogs.

Not the meaning itself, but the origin of that line in the song, and the song’s title.

Keep reading to learn exactly what Snow Patrol are singing about in their biggest hit ever, plus the inspiration for the song’s title.

Following its release, Chasing Cars went on to become Snow Patrol’s biggest hit and has recently been revealed as the most-played song on British radio over the last 20 years.

The slow-building ballad was penned by lead singer Gary Lightbody. It gained significant popularity in the US after being used in the finale of the medical drama Grey’s Anatomy’s second series, which aired on the 15th of May 2006.

Lightbody described the song as being “the purest love song” he had ever written at the time, with the lyrics being a reflection of the strong affection he felt for his significant other.

The lyrics reflect the singer’s vision of the relationship he is in, and of how he sees that relationship, and how he wants it to develop.

Chasing Cars was released as the second single from their fourth studio album, Eyes Open, on the 6th of June 2006.

The song ended 2006 as the year’s 14th best-selling single in the UK and it peaked at number 6 on the UK Singles Chart and number 5 on the US Billboard Hot 100. It remains Snow Patrol’s biggest-selling single to date.

Let’s take a look at the lyrics in their entirety, before diving into our analysis of their meaning.

If I lay here
If I just lay here
Would you lie with me and just forget the world?

If I lay here
If I just lay here
Would you lie with me and just forget the world?
Forget what we’re told
Before we get too old
Show me a garden that’s burstin’ into life

If I lay here
If I just lay here
Would you lie with me and just forget the world?
Forget what we’re told
Before we get too old
Show me a garden that’s burstin’ into life

All that I am
All that I ever was
Is here in your perfect eyes, they’re all I can see
I don’t know where
Confused about how, as well
Just know that these things will never change for us at all

If I lay here
If I just lay here
Would you lie with me and just forget the world?

The song’s title appears once within the song’s lyrics, in the third verse, when Lightbody sings to his partner, “Let’s waste time chasing cars around our heads.”

The final three words of that lyric show that the chasing of cars mentioned is a figurative expression and not a literal one.

Lightbody revealed that he got the metaphor from his father, who used the expression to describe Gary’s infatuation with a girl, saying “you’re like a dog chasing a car. You’ll never catch it, and you just wouldn’t know what to do with it if you did.”

That’s not to say Lightbody was trying to say that his relationship was a pointless exercise, rather that he would like to spend time with his partner doing nothing but enjoying each other’s company.

That same sentiment is echoed in the chorus with the lyric “If I lay here, if I just lay here, would you lie with me and just forget the world?”

The song is a great love song, with the lyrics also revealing that the love Lightbody feels is being reciprocated with the line “All that I am, all that I ever was, is here in your perfect eyes, they’re all I can see.”

This means that he can tell by the way she looks at him how she feels. The song’s lyrics are complemented by the simple instrumentation, with the two-note alternating guitar pattern continuing throughout the song.

The rather abrupt ending seems to be a nod to being snapped back to reality from Lightbody’s reverie.

Chasing Cars was a huge hit for Snow Patrol. It is not actually about Chasing Cars. Instead it is a love song that got its title from something the singer’s father once told him.

This song is about a perfect love, but sometimes even perfect love stories have to end. Take a look at the lyrics and meaning of Wild Horses by The Rolling Stones for a great example of a great relationship that has to end.

This article looks at the MacArthur Park lyrics meaning. This song by Richard Harris (yes, the first Dumbledore from Harry Potter) also talks about a love affair that had to end amicably and took place in, you guessed it, Los Angeles’ MacArthur Park.