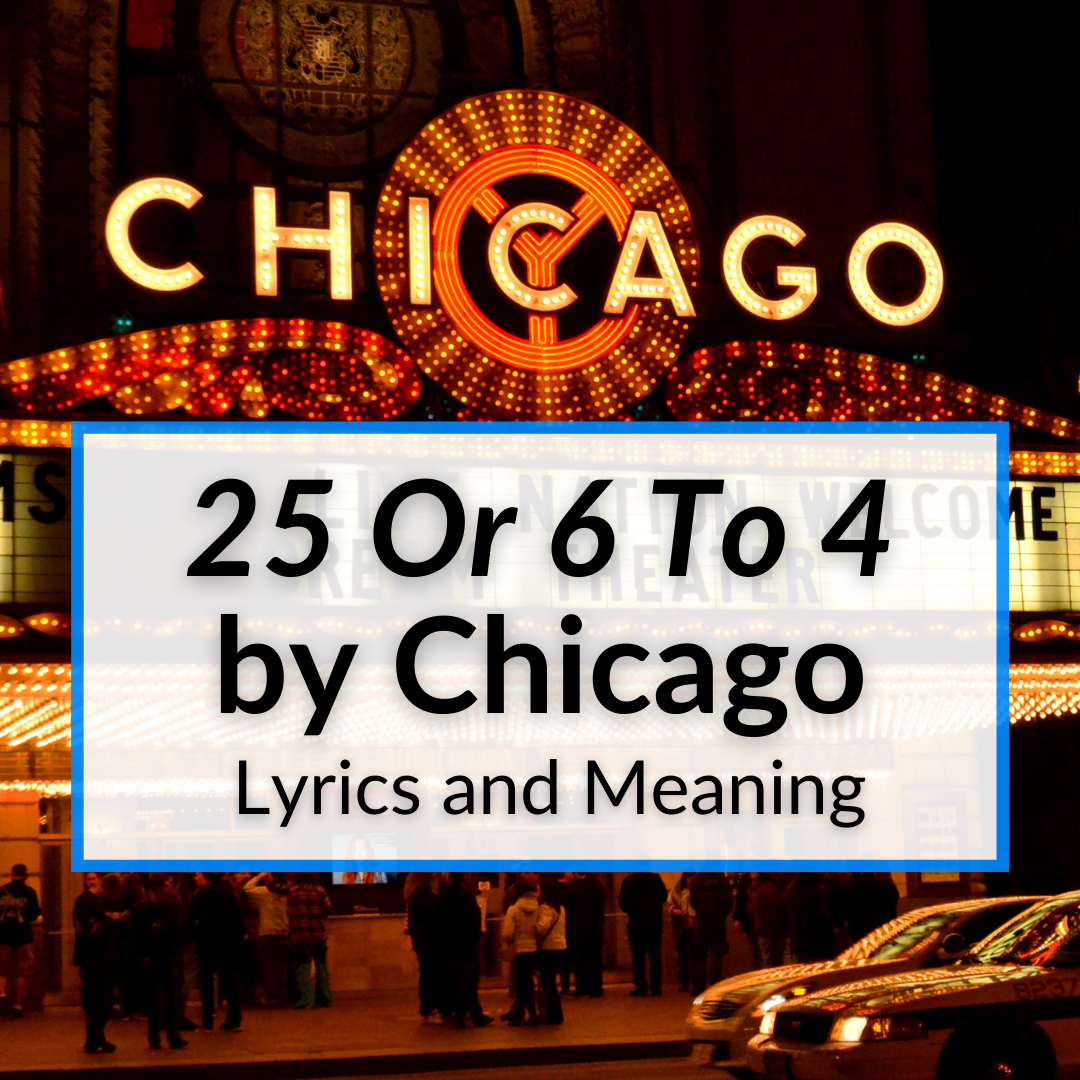 It is, perhaps, their best known song these days.

It is also one of those songs that has sprouted numerous theories as to the meaning of the lyrics.

And many of those theories are still out there today.

In fact, most still believe one of the various theories, and not the truth.

And the truth is that Robert Lamm, the writer of the song, has explained exactly what it means.

Keep reading for the complete 25 Or 6 To 4 lyrics and their meaning, as explained by the song’s author himself. But be warned. If you’ve heard one of the many bizarre theories, the truth will likely be a letdown.

The song was conceived in the middle of August 1969. That is an important month in the history of music, because the Woodstock festival took place that month.

But this story takes us to the opposite coast of the country, to California. There we find Robert Lamm, keyboardist, singer, and founder of the band Chicago, working on what would be the band’s second studio album: the homonymous Chicago.

This was the first album that the band published under the name of Chicago. They has originally called themselves Chicago Transit Authority, but due to legal problems with the actual transit authority of Chicago, they decided to simply go with the name Chicago.

The entire (double) album is full of memorable music, but the track that has remained most in the memory of the general public is 25 or 6 to 4.”

There have been a number of theories as to the meaning, with most believing the tun to be about drugs. It was even banned in Singapore for years (not that unusual, since they banned a lot of songs), due to the alleged allusions to drugs.

However, the meaning of this song actually has nothing to do with drugs, according to Lamm himself. Let’s take a look at the lyrics, before going into their meaning.

Waiting for the break of day
Searching for something to say
Flashing lights against the sky
Giving up, I close my eyes

As mentioned, the most common theories about the meaning of this song believe it has to do with drugs. Specifically, they believe that the title refers to the chemical formula of lysergic acid (LSD).

Another similar theory says that 6 to 4 refers to LSD, because if you take the acid at 6 pm, the effects last until 4 am, 10 hours later. One more states that it is the unit of measurement of cigarettes that you can make with the contents of a $10 bag of marijuana.

The reality is that Robert Lamm himself has clarified the meaning. And it is much simpler. The title refers to the specific time of day when he composed the song: “Waiting for the break of day” — at 25 or (twenty)6 minutes to 4 am (that is, 3:35 or 3:34 am). As simple as that.

And he took the time to explain in more detail:

In a chat with musician Chris Isaak, Lamm recalled that, at that time, he shared a house in Los Angeles, specifically in the Hollywood Hills. From his room, he could watch the sunsets with the silhouette of the city in the background.

In this framework, the musician found himself working on a song in which he wanted to describe what the composition process represented for him.

And although initially, it served Lamm to fill in a little more text, he ultimately kept that line in the song.

Feeling like I ought to sleep
Spinning room is sinking deep
Searching for something to say
Waiting for the break of the day.

This final verse completely encapsulates the whole song. The artist wants to sleep, and should be sleeping, since  the room is starting to spin from tiredness. But he doesn’t want to sleep until he writes something down.

“Waiting for the break of day” may indicate that the artist is unable to write anything during nighttime and maybe he needs daylight and sunshine as inspiration. Or simply states that the morning is near and he’s still having trouble. The first chorus says:

Sitting cross-legged on the floor could mean that the artist is meditating, trying his best to focus and find some words, any words, worthy of the song. Nothing helps, neither meditation, splashing the face with water, looking out of the window…

So the numbers simply represent the time. And since it is almost 4 am, that means the struggle has already lasted for a few hours.

So that was the mystery behind those numbers. Seen this way, perhaps it took away some of the magic, but it is also true that this is better than some of the bizarre theories that are out there surrounding the meaning (specifically those related to drugs).

Yes, the song would be more metaphorical and therefore quite more interesting, but be that as it may, connecting Chicago with drug-related songs is simply unimaginable.

From the beginning to the end it is a captivating piece. Although if we were to highlight some parts, it would be the long and great guitar solo that Terry Kath scored. It is not exactly the one you will see in the video, however, since that is a re-recording that the group did in 1974.

Usually, this is the song that Chicago plays at the end of concerts. On some tours with Earth, Wind, and Fire, it gave both groups the opportunity to put on a trumpet display with the voice of Philip Bailey, who replaced Peter Cetera when he left the group in 1985.

When you start looking in to song meanings, you find a lot of examples where fans read so many different things into the lyrics, but the artist eventually explains that they are very straightforward. The meaning of the In The Air Tonight lyrics written by Phil Collins are a great example.

There are also extremely cryptic songs that weave together various types of images and influences. A good example of this are the lyrics to The Weight and their meaning.

For another song about a specific person (and a group of people at the same time), take a look at our breakdown of the lyrics and meaning of Tiny Dancer by Elton John. In his case, he sings about the person (and the people) in a positive light.