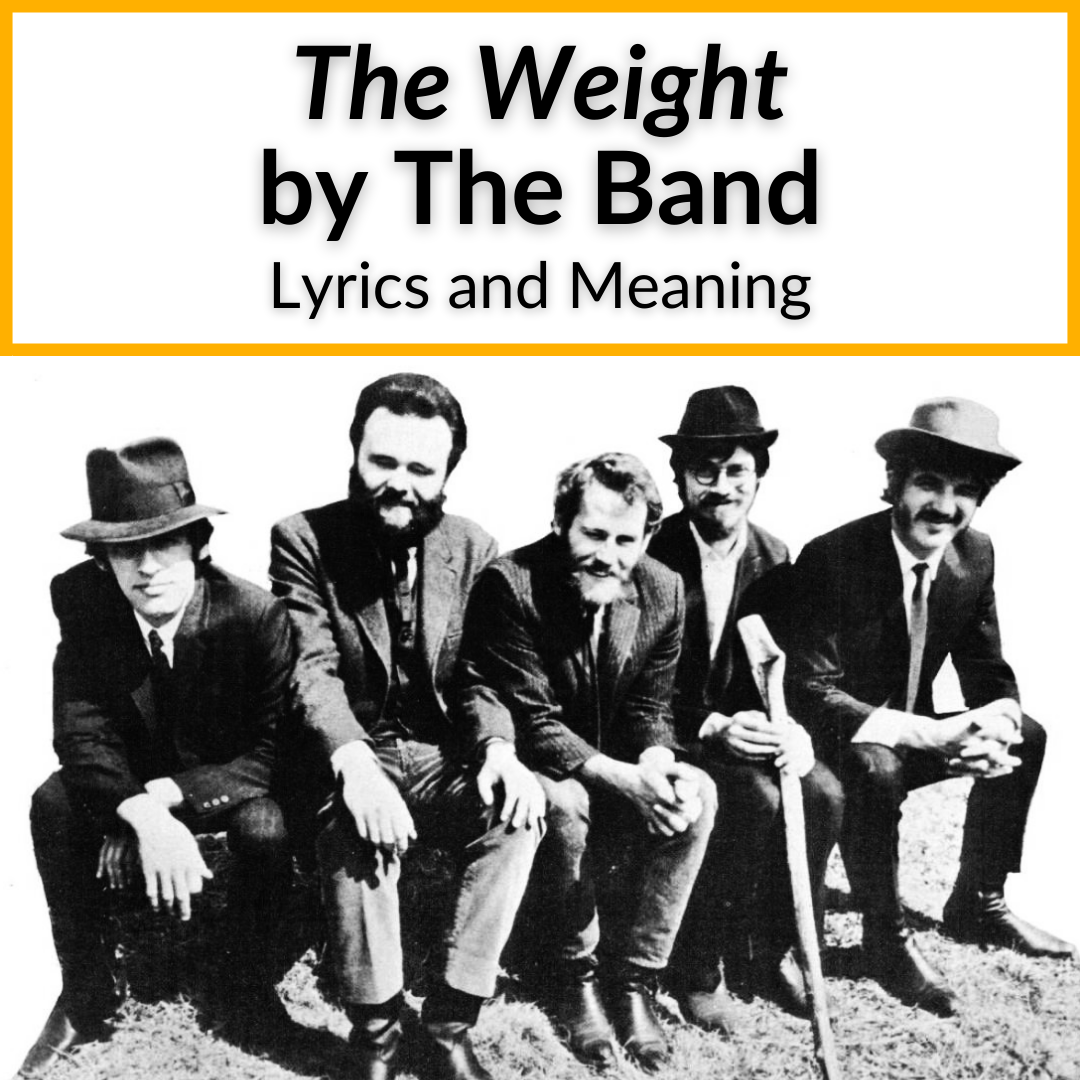 Have you seen the movie Easy Rider?

The soundtrack was groundbreaking and remains one of the most famous movie soundtracks of all time.

The Weight is included on that soundtrack, although as a cover version by Smith.

The deluxe edition of the soundtrack includes the original song by The Band.

This song was a seminal tune of the sixties.

But what are they actually singing about?

The song contains plenty of biblical references, but isn’t about that at all.

Even the Nazareth referenced in the lyrics is not the one in Israel, but the one in Pennsylvania.

So it is not religious. But it is a lot of other things.

Keep reading to learn exactly what the lyrics to The Weight actually mean. They are cryptic, indeed.

The Weight Lyrics And Meaning

The Weight wasn’t even born as a hit. Its appearance on the charts in 1969 was so discreet that no one would remember it until the incredible Aretha Franklin made it a success in the USA.

She was accompanied on the guitar by the sadly deceased Duane Allman, a couple that was surprising to see together, to say the least at the time.

If you compare the Franklin sound with that of The Band in the original 1969 recording, devoid of the mystique that Scorsese brought as well, you will realize what a piece we have in our hands.

The Weight emerged within the package for “Music from Big Pink” (1968), the first album by a group of Canadians who had been playing together since the fifties, along with cowboy Ronnie Hawkins, with whom they had been using the appropriate name of The Hawks.

Abandoning a boss and establishing themselves as a group with a name as simple as it is arrogant (The Band) was not easy. In fact, the existence of the group was always punctuated by the confrontation between Robbie Robertson and Levon Helm.

The other members of the quintet – Garth Hudson, Richard Manuel, and Rick Danko – contributed to these rifts as well.

To put that aside for now, the vinyl was only valued years later, when everyone turned their eyes on The Band, once they became Bob Dylan’s support group.

Together with Dylan, they gave rise to those mythical The Basement Tapes (1975), a key work of the singer-songwriter from Minnesota.

When all was said and done, The Weight ended up being ranked number 41 on Rolling Stone’s 500 Greatest Songs of All Time list from 2004 and number 13 on Pitchfork’s list of best songs of the sixties. Let us now take a quick look at the lyrics to The Weight, before diving into the meaning of the song.

I pulled into Nazareth, was feelin’ about half past dead
I just need some place where I can lay my head
“Hey, mister, can you tell me where a man might find a bed?”
He just grinned and shook my hand, “No” was all he said

I picked up my bag, I went lookin’ for a place to hide
When I saw Carmen and the Devil walkin’ side by side
I said, “Hey, Carmen, come on let’s go downtown”
She said, “I gotta go but my friend can stick around”

Go down, Miss Moses, there’s nothin’ you can say
It’s just ol’ Luke and Luke’s waitin’ on the Judgment Day
“Well, Luke, my friend, what about young Anna Lee?”
He said, “Do me a favor, son, won’tcha stay and keep Anna Lee company?”

Crazy Chester followed me and he caught me in the fog
He said, “I will fix your rack if you’ll take Jack, my dog”
I said, “Wait a minute, Chester, you know I’m a peaceful man”
He said, “That’s okay, boy, won’t you feed him when you can”

Catch a cannon ball now to take me down the line
My bag is sinkin’ low and I do believe it’s time
To get back to Miss Fanny, you know she’s the only one
Who sent me here with her regards for everyone

The song The Weight tells the story of a boy who visits Nazareth, where his friend Fanny asks him to visit several of her friends. The Weight (his burden) is all these strange people that he promised he would visit.

Robbie Robertson claims that this song was influenced by the work of Luis Buñuel, a Spanish director who made some of the first films dealing with surrealism. Robertson was intrigued by the characters in his movies, who were often good people doing bad things.

Its lyrical composition is exciting in itself, as it is set in a place called Nazareth, where the singer meets a series of colorful characters on his quest to basically find a place to sleep.

Nazareth, as we all know, is the name of an ancient city where Jesus once resided. There are several references that read as if they were biblical in nature and, as such, have a deeper meaning than what is presented on the surface.

But in reality, they actually point to aspects of the artists’ current lives (at the time of the track’s release), including a number of shout-outs to people and places they’re familiar with.

It has nothing to do with religion, although there are indirect biblical references scattered everywhere, to make it sound deeper and perhaps make it more appealing.

This song tells the sorrows of a guy whose girlfriend dies, and the burden that this leaves him (the weight) in this life. Miss Moses may be Anna-Lee’s mother. This Luke is in the same situation as the narrator of the song and asks him to take care of what could be his daughter.

In the part that talks about the crazy Chester, when he asks him to take care of his dog, the narrator misunderstands him. He thinks that Chester wants him to kill the dog and says that he is a peaceful man.

But Chester just wants him to take care of the dog and answers “ok, feed him when you can”. It’s meant to be a slightly comedic scene.

When he says “catch the cannonball now to take me down the line”, he is referring to a route on the way to the final judgment. This could be translated into taking the train there, if we move it to the current context.

It is worth noting that Nazareth does not refer to the city of Israel. According to singer Robbie Robertson, it refers to a city in Pennsylvania, USA, where the Martin guitar factory is located.

The Weight is a cryptic song that addresses in surreal elements about sin, death, the devil, and the weight of guilt in its lyrics. These topics were all very abundant in the beatnik literature of the time and in the different folklores of the American prairie.

Robbie Robertson, established as the author of the lyrics (although he eventually had to settle this issue in court), openly recounted the surrealist influences of the Spanish filmmaker Luis Buñuel and his aesthetic and vital contributions.

However, owing to numerous double and triple meanings, the music is of an almost unnerving subtlety.

The almost monotonous way in which verse and chorus are linked, having each of the members tell/sing one of the episodes, and those rising choruses combine to give rise to an emotional charge, which you don’t want to get rid of.

The song has been covered by many artists. A version was also included on the famous soundtrack of “Easy Rider” (D. Hopper, 1969). That version was performed by the rock band called Smith, although the deluxe version of the aforementioned soundtrack has the version performed by The Band.

The Band went their separate ways after the already mentioned concert recorded by Scorsese (which gave rise to a luxurious triple album). These days, Robbie Robertson is credited as the songwriter for this song and many other songs by The Band.

However, drummer Levon Helm disputes this and brought the issue to court. The results were sole songwriting credit for Robertson, resulting in his getting the majority of royalties for most songs by The Band.

The rights to The Weight ended up being distributed among the five members, with drummer Levon Helm receiving a smaller percentage, despite being (under certain points of view) the soul that underlies the emotions of the song.

Even today, Helm (and other members of The Band) claim that the songwriting was collaborate. Robbie Robertson disagrees and recounts exactly how the song came about:

“I wrote the song in Woodstock, in a house that I had there, in a place called Larson Lane, where I had a table and a guitar, and it was like my little workshop… And when I sat down to try to think of something, I realized that I had nothing in mind. I thought, ‘Oh shit!’ Some days it comes and others it doesn’t. I sat the guitar on my lap and I was leaning over it a little bit, and I looked into the sound hole of the guitar and it said ‘Nazareth, Pennsylvania’ [where Martin guitars are made].”

From there, the lyrics started pouring.

Whoever is responsible for writing The Weight, they crafted a song that has stood the test of time. It was one of the biggest hits of the sixties and remains a popular song today. The sheer number of other major artists who have covered the track is a testament to that.

The lyrics are fairly cryptic, infused with biblical references that aren’t really that, images from American folklore, ideas from surrealism, colorful characters based on real people, and a healthy dose of humor. In short: The Band gave us everything you could want from a song.

For another song that is much simpler and far less cryptic, but still carries a heavy dose of symbolism and mysticism, check out our dive in the meaning of the lyrics for Edge Of Seventeen by Stevie Nicks.

The lyrics to Pumped Up Kicks are quite different in meaning, but similar in spirit. They also deal with someone carrying a lot of metaphorical weight, though this person deals with it in the worst way possible.

The Sweet Home Alabama lyrics meaning is also fairly cryptic. To this day, no one really knows what intention Lynyrd Skynyrd had when writing them and that fact has lead to a lot of controversy surrounding the song.