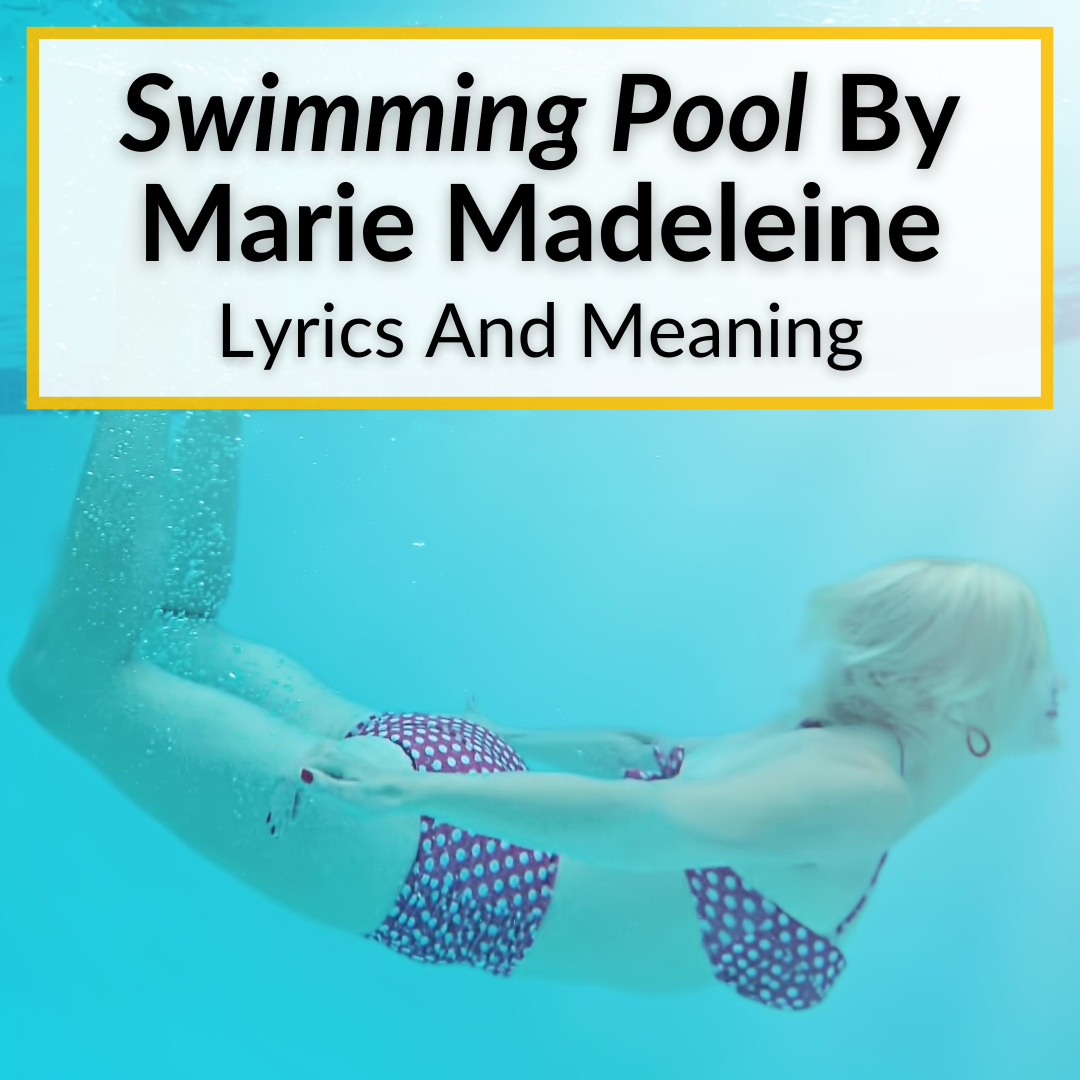 And the song Swimming Pool by Marie Madeleine is certainly different from what you usually hear these days.

It is dark and moody. And it is also upbeat and cheerful.

The contrast between those two moods are part of the appeal.

The vocals reflect that contrast as well.

But what are the two of them actually singing about?

Keep reading for the full lyrics to Swimming Pool, followed by an in-depth analysis of their meaning.

Fans of electro darkwave will know Marie Madeleine for sure. With their captivating electro sound reminiscent of the 70s and 80s, the band is slowly gaining popularity, not only around Europe, but in the USA as well.

One song particularly remains in our ears: the psychedelic sing-along song titled Swimming Pool. It is interesting on many levels, starting from an upbeat 120 bpm tempo, to strange lyrics and mesmerizing vocals.

Drunk, I’m walking with you
Next to the swimming pool
Cold concrete burns my feet
In the early night heat
Five o’clock, you and me
Glass fall crushed on the floor
My cold feet red bleeding
I don’t care, keep singing

[Verse 2]
You teased me, I want more
I would restart from here
I feel like I’m a whore
What am I doing, my dear?
I’m lost and I don’t know
Where I am, what I do
You’re just a little girl
I’m just lost in your world

When it comes to the vocals, the male voice is deep and distorted, adding a sense of mystique and drowsiness. The female vocals are quite high-pitched, happy, upbeat, and seductive.

The lyrics fully accompany this atmosphere as the guy says in the first verse how he is drunk, in pain, but doesn’t care, as long as he is with her.

The first verse is also full of oxymorons (a stylistic figure where two opposite words combined create a phrase), such as “cold concrete burns my feet” and “early night heat, five o’clock.” Oxymorons often give a sense of unnatural reality, and in combination with the guy’s vocals, it can be interpreted as if they were in a dream.

The guy is obviously in love with the girl, or better said – obsessed and hypnotized. He’s walking over the shattered glass and burning concrete but he doesn’t mind. He keeps singing (singing is also commonly related to falling in love).

But there is no word of her walking over the glass and suffering, and we get the feeling as if she was flying next to him. It is evident that the guy is the only one that is suffering. In other words, it is a blind love.

The voice sounds inviting and the lyrics themselves suggest swimming, diving, sinking, and dying. The main association here is a succubus, an ancient female demon that seduces men in their dreams, most often via sex and lust, in order to kill them in the end.

The first verse, which is full of oxymorons and deep, drowsy vocals, may suggest that this is indeed a dream where a pretty girl with supernatural powers is hypnotizing men with her song and beauty, luring them into the swimming pool, and then drowning them.

Note that there is one more oxymoron in the chorus “cold heat of the pool.” Pools are often cool or mild, but here we have “cold heat” which arguably combines cold water and passionate heat. She is attracting him into cold water for some heated lust.

In the second verse, which is again sung by the guy, it is more evident that he has become completely charmed: “You teased me, I want more.”

But then he proceeds to realize this by saying “What am I doing, my dear? I’m lost and I don’t know where I am, what I do, you’re just a little girl.” Evidently, he is aware that something is off.

He is not aware of where he is or what he is doing. He is just seeing this pretty, seductive girl who is luring him into the pool with lust and song. And he can’t help it, singing “I’m just lost in your world.”

This last line may once again suggest that this is a dream in which she has complete control over him. While the first verse is more about his physical pain, the second one is about his mental pain. He is completely losing his mind with the strange setting and the intoxication, but he can’t help himself.

The song proceeds to the chorus once again, the same one as before, which now sounds even more triumphant than the first one. The chorus ends with repetitive phrases “in the cold heat of the pool”, probably suggesting that he is finally in the pool, with her ending his misery. The succubus has won. He is dead.

The song is a perfect combination of mystique, lust, love, and death, similar to the old gothic short stories of Romanticism. There are eerie settings (in this case, a dream), supernatural powers (succubus and her power to hypnotize men), blood (stepping on broken glass), and death (finally drowning in the pool).

What impresses the most is the music, which is happy and upbeat during the chorus, but also a bit more sinister and somber during the verses, thus emphasizing the storyline further.

The Marie Madeleine song Swimming Pool is undeniably catchy. It also has simple lyrics, but they hide more meaning than you might think. Much of it is concealed behind numerous oxymorons.

But it is not just the lyrics that contrast opposite ideas. It is also the vocals and the music itself. And, of course, the topic of he song as a whole. Hopefully this article has helped give you a better understanding of the meaning behind the lyrics to Swimming Pool by Marie Madeleine.

For another song with seemingly simple lyrics that hide a deeper meaning, check out our analysis of the meaning of the Have You Ever Seen The Rain lyrics. In that case, all the speculation about the lyrics was put to rest by the writer himself, in an interview that pissed off a lot of fans.

We also have an article discussing the Deja Vu by Olivia Rodrigo lyrics and meaning and another one covering the meaning of the lyrics to Hey Ya by OutKast.