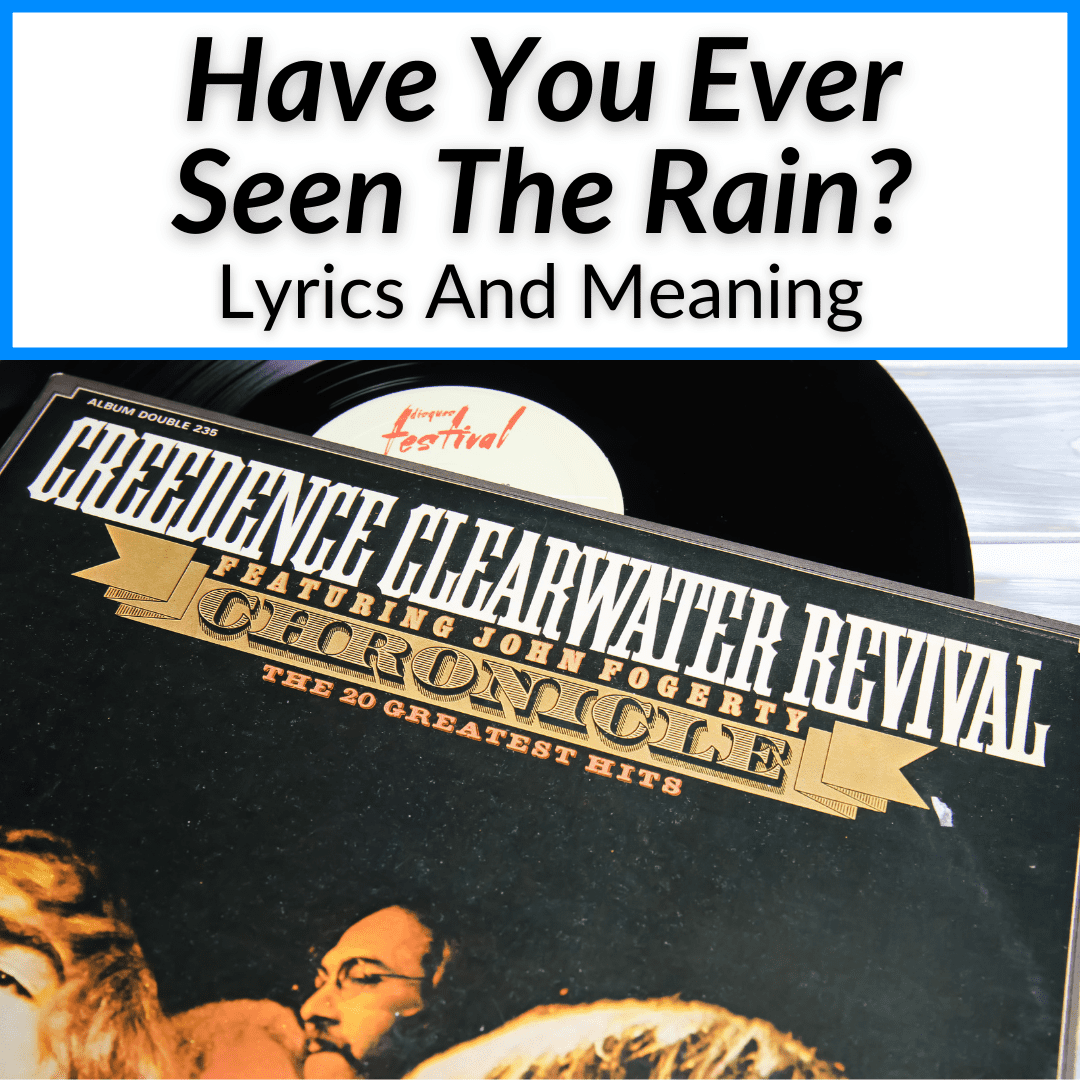 Do you know who wrote and originally performed Have You Ever Seen The Rain?

I ask that, because I recently learned that most people don’t.

I mean, the song is before my time, too. But I still know who wrote it.

That said, I did not know the meaning behind the lyrics to this song.

I always heard it had to do with Vietnam. It seems that’s what most people thought.

But John Fogerty explained the true meaning in an interview.

That explanation came as a huge disappointment to a lot of fans. I was a bit disappointed to hear it myself.

Keep reading for the full lyrics to Have You Ever Seen The Rain, and a complete discussion of their meaning including all of the most popular theories.

Have You Ever Seen The Rain Lyrics And Meaning

There are songs that everyone knows, even if they have no idea who sings them. They were once hugely popular and have remained in the collective imagination long after. At the same time, the imprint of the performers fades away, at least for the majority of the public.

That may be the case with Have You Ever Seen the Rain, written by John Fogerty and performed by Creedence Clearwater Revival in 1970.

But whether you knew you wrote and performed it or not, it has a secure place among the great songs of rock and roll, and even country, history.

It is one of the most famous and well-known tunes by Creedence Clearwater Revival, taken from the 1971 album Pendulum, and covered over and over again throughout history.

Undoubtedly, the influence of Have You Ever Seen the Rain is enormous, especially in rock music history. Many have been moved listening to the powerful chorus of the song, which is like an arrow straight to the heart.

However, the song hides some secrets and curiosities that you may not know.

Have You Ever Seen The Rain Lyrics

Have You Ever Seen The Rain Meaning

Have You Ever Seen the Rain is one of the songs that launched the album Pendulum to the top of the sales charts. The generally accepted reason that inspired Fogerty to write the song was the departure of his brother Tom from the group.

But the feelings the lyrics reflect are universal and lend themselves to multiple readings.

John Fogerty, at the time of writing this song, knew that his brother Tom was about to leave the band, just when the group was beginning to achieve musical and commercial success.

Instead of enjoying it, the group was plagued by gigantic tension. The most recognizable line from the song – “I want to know, have you ever seen the rain comin’ down on a sunny day?” – relates to this. Although everything was going well, there were still tremendous problems.

But the rain could also represent the stark reality that was breaking through in 1971.

The dreams and ideals that rock and roll, and youth culture in general, had nurtured in the previous decade, were now being abandoned by many of those who had contributed to creating them. Then there was the US war in Vietnam.

Let’s take a closer look at the three major theories about the meaning of this great song.

This enigmatic halo that surrounds the song has created many speculations and theories about the meaning of the lyrics and what Forgety wanted to convey when he composed it.

One of the more popular theories is that the song refers to all those ideals of the 60s that were being lost by society. The hippie-spirit born at the end of the decade was being extinguished, and the people behind it integrated into mainstream society.

Another popular hypothesis is that the song relates to the internal situation that the band was experiencing at that time. There was a lot of tension between the members, with strong differences of opinion. It would eventually lead to the dissolution of the group.

This theory was fueled more when Fogerty himself dropped it in a later interview. Nevertheless, it is natural to think that this is not what he was really thinking at the time, because it would mean that he had composed a song for a future event that was yet to happen.

The third major theory is that the text of the song refers to the Vietnam War. The word ‘rain’ is actually referring to bombs falling from the sky. The song hit very hard among a discontented generation that cried out for peace in the world, at a time when their government was sending young people to die in Vietnam.

Ten years after the release of the album, John Fogerty punctured everyone’s balloon. In an interview, the writer of Have You Ever Seen the Rain revealed the true intentions that encouraged him to write the lyrics of the song.

He explained that the song describes the increase in tension within the band and the imminent departure of his brother Tom from the group, due to contract problems and participation within the songs.

This explanation by Fogerty is one of the great disappointments of the age. For many fans, it was a bucket of cold water. Or cold rain, in this case.

Many believe that John Fogerty should not have provided this explanation. He certainly could have avoided the discontent of his fans, had he stayed quiet.

The lyrics themselves do not suggest the meaning he gave at all. Without that explanation, they seemed deeper and more intelligent, full of allusion and allegory.

Although John Fogerty wrote the song while feeling terribly sad, the meaning has evolved for him over time. While it originally referred to his brother, he now sings it remembering his daughter, Kelsy.

He has said that every time he gets on stage and performs it, he thinks of Kelsy and rainbows.

Have You Ever Seen The Rain Lyrics Meaning: Final Thoughts

The truth is that the CCR created a song that reached into the hearts of the general public and became a classic. Perhaps there is a hidden message still to be revealed, or perhaps Fogerty already revealed everything and there is no additional meaning.

In the meantime, the biggest names in music, such as R.E.M., Boney M, Rod Stewart, The Ramones, Dire Straits or Héroes del Silencio have covered it in their own way, with their own interpretation.

In addition to being covered by numerous artists, the song was also the closing for great movies like Philadelphia (1993), and television series like Las Vegas and Dexter.

Performances aside, Have You Ever Seen the Rain is a simple, direct, and sad composition that has transcended its time and circumstances to become a timeless and intergenerational anthem.

John Fogerty has certainly created a timeless masterpiece. Perhaps that was never his intention, but it delivered a strong message nonetheless.