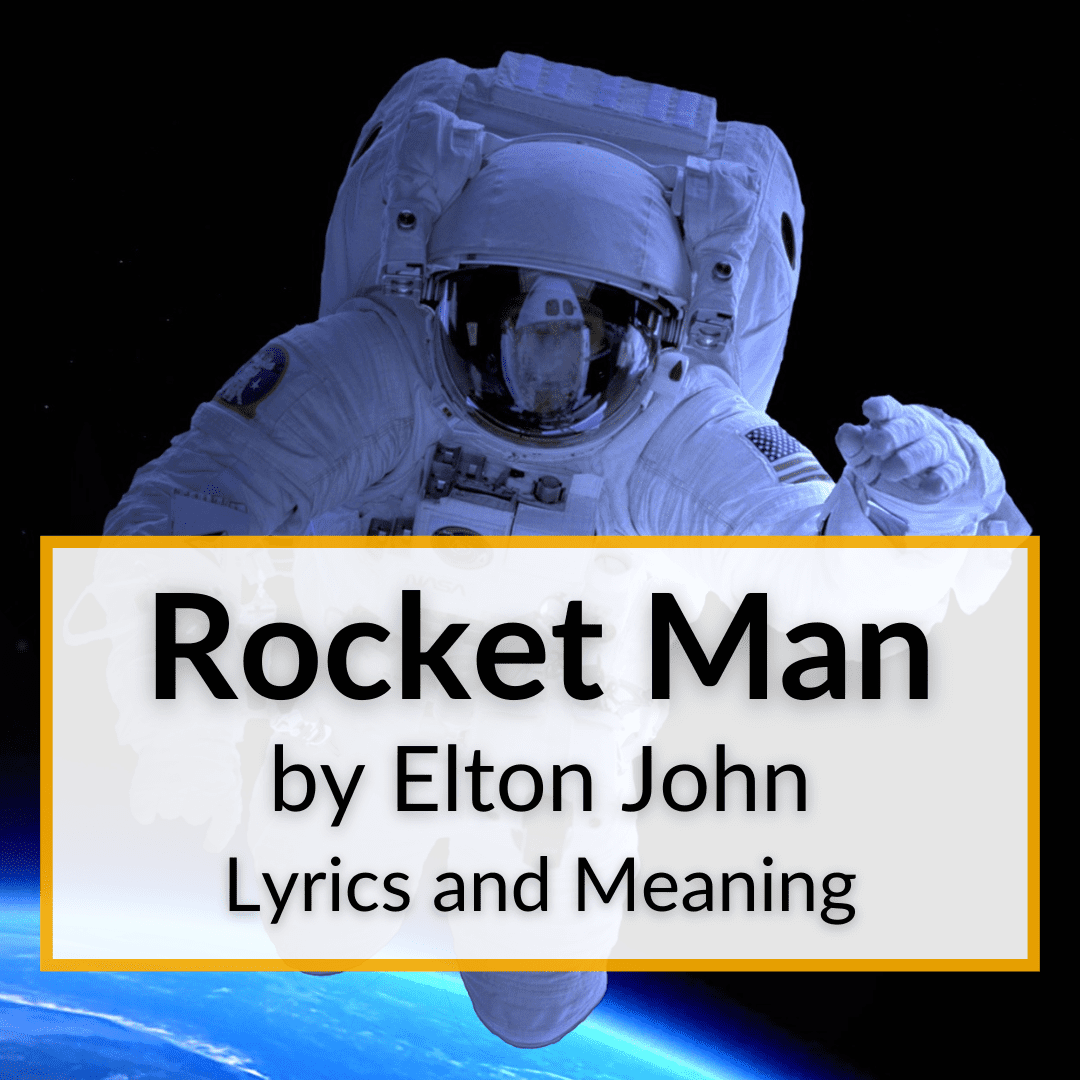 Quick, what is Elton John’s most famous song?

Did you answer Rocket Man?

Most people do. And for good reason.

It is his biggest hit and the song he is most known for.

The recent movie about his life was even titled Rocketman.

The song talks about an astronaut who has to leave his family on a long space mission.

But many also read several other meanings in the song, behind the most obvious one.

Is there any truth to that?

Keep reading for a look at the complete lyrics to Rocket Man, and an analysis of their meaning. We’ll also take a brief look at the aforementioned movie.

Rocket Man is Elton John’s most famous song. It made it to number 2 on the UK Singles Chart and number 6 on the US Billboard Hot 100 when it was released.

But it wasn’t the first Rocket Man song at the time, a time when the world was gripped by the excitement of the moon landing.

A year before its release, the American band Pearls Before Swine also wrote a song called Rocket Man. Just like John’s version, it was also inspired by a Ray Bradbury book.

Bernie Taupin admits to being partially inspired by that song when he composed the more famous Rocket Man that would become Elton John’s monster hit.

Taupin is the composer of many of Elton John’s hits. They have combined their geniuses perfectly multiple times, with Elton adding the melody and Bernie the lyrics that illustrate it.

So what was Bernie talking about in the lyrics? There were several influences working on him at the same time in this song. We’ll give you the full lyrics next, before taking a closer look at the meaning. We will also touch on the recently released movie Rocketman.

She packed my bags last night, pre-flight
Zero hour, 9 a.m.​​
And I’m gonna be high as a kite by then
I miss the Earth so much, I miss my wife
It’s lonely out in space
On such a timeless flight

Mars ain’t the kind of place to raise your kids
In fact, it’s cold as hell
And there’s no one there to raise them if you did
And all the science, I don’t understand
It’s just my job five days a week
A rocket man
A rocket man

The recent film, entitled Rocketman, about the life and work of Elton John swept the box office, but what is hidden in the song Rocket Man that gave the film its title? Is it really about the life of an astronaut, or rather a hymn about drug use?

Many people have ascribed a double meaning to the lyrics, believing it to be about drug use. They key phrase they point to is ‘high as a kite’.

But is Elton simply referring to the journey of the astronaut and his spaceship that ‘flies high’, or rather the high that drugs give you? Let’s begin our analysis by looking at the literary work that inspired the song.

The Short Story The Rocket Man

That work is the short story The Rocket Man, which is part of The Illustrated Man by Ray Bradbury. The story places us in the eyes of a boy anxious to see his father again. His father who works as an astronaut in space.

Given the situation, the astronaut promises his family that he is going on one last space adventure. But on that final trip, he dies when he crashes into the sun.

The story of the song Rocket Man differs a bit from the original story about the boy who misses his father. In the musical version, the father is the main character, but still needs to leave on a space mission far from his beloved family.

However, despite the familiar romanticism of the original story, some people find a hidden double meaning in Elton John’s song, in lines like:

She packed my bags last night before the flight
zero hour 9 am
and by then I’ll be as high as a kite.

Again the phrase high as a kite definitely alludes to drug use. The colloquial phrase ‘fly high like a kite’ has been used since 1930 (and was on the rise in the 60s and 70s) to refer specifically to the high the drugs give you.

Most likely, there are a few different meaning all contained within the lines of the song. The story of the astronaut is the primary theme.

Bernie Taupin wrote Rocket Man when space exploration was at its height, in 1969, when man set foot on the moon for the first time. In 1972, the year they launched the song, the Apollo 16 mission sent astronauts to the moon for the fifth time.

On a more personal level, Elton John was experiencing great success at the time, having broken out in the US in 1970 with the song Your Song. In this way, many also believe that Rocket Man is a metaphor to talk about the loneliness of fame.

I miss the Earth so much, I miss my wife
It’s lonely out in space
On such a timeless flight

You can easily associate the above excerpts with someone whose routine involves a lot of touring, and the loneliness of being away from home and your own, alone in hotel rooms or on planes and buses.

And I think it’s gonna be a long, long, time
‘Til touchdown brings me ’round again to find
I’m not the man they think I am at home

It’s easy to parse the above lines as an expression of the angst the rockstar feels living a double life, publicly becoming a completely different person than he used to be at home before fame.

It’s like your celebrity routine sends you into a parallel reality, another planet, which may look fascinating from afar, but which is not a place you would take your family to.

Mars ain’t the kind of place to raise your kids
In fact, it’s cold as hell.

In 2019, the movie Rocketman hit theaters around the world. It is named after the song for which the British musician became famous. The feature brings Taron Egerton into the role of the singer, showing his trajectory from childhood to the first years of success in his career.

The idea was not exactly to tell a story of overcoming, but to honestly show the problems Sir John faced as he rose to fame, many of which are not widely known: drug addiction, struggle with bulimia, nymphomania, and tantrums.

In the first scene, Elton John is shown at an Alcoholics Anonymous meeting wearing one of his gaudy costumes, which he will slowly undress throughout the story. The idea is to show what’s really behind all the glitz and glamor of fame.

In this way, the title Rocketman takes on a double meaning: in addition to referring to the artist who achieved meteoric fame, he is also the man who fell from stratospheric heights, until he managed to rise again.

The film won the Academy Award for Best Original Song for (I’m Gonna) Love Me Again. It was composed by Elton John and Bernie Taupin, of course.

That the central axis of Rocket Man was drug addiction is not unreasonable. Elton John confessed in an article he wrote for The Guardian, that the time in which the song was released was a wild stage of his life, where drugs and sex played a fundamental role.

“Everyone knows that I had a lot of drugs and sex during the ’70s and ’80s,” explains the musician in the article. Bernie experienced Elton’s darkest stage first-hand. He witnessed Elton consuming large amounts of cocaine and used this song to allude to his friend’s addiction.

Elton has stated that in the 70s and 80s he used drugs in his time of sexual debauchery, so why not pay them an ode with Rocket Man?

The list of hit songs Elton John has gifted the world is long. Right at the top is Rocket Man. It was based on a short story about a boy who misses his astronaut father. In the song, the father takes on the main role, as he sets off on a long mission to space.

If you are an Elton John fan, you may also like our discussion of the Take Me To Church lyrics meaning. Often misunderstood as an invitation to worship, it is actually highly critical of the catholic church and its stance on homosexuality.

Another song dealing with decadence, in this case specifically in Los Angeles, is The Eagles’ biggest hit. See our breakdown of the Hotel California lyrics meaning for more.