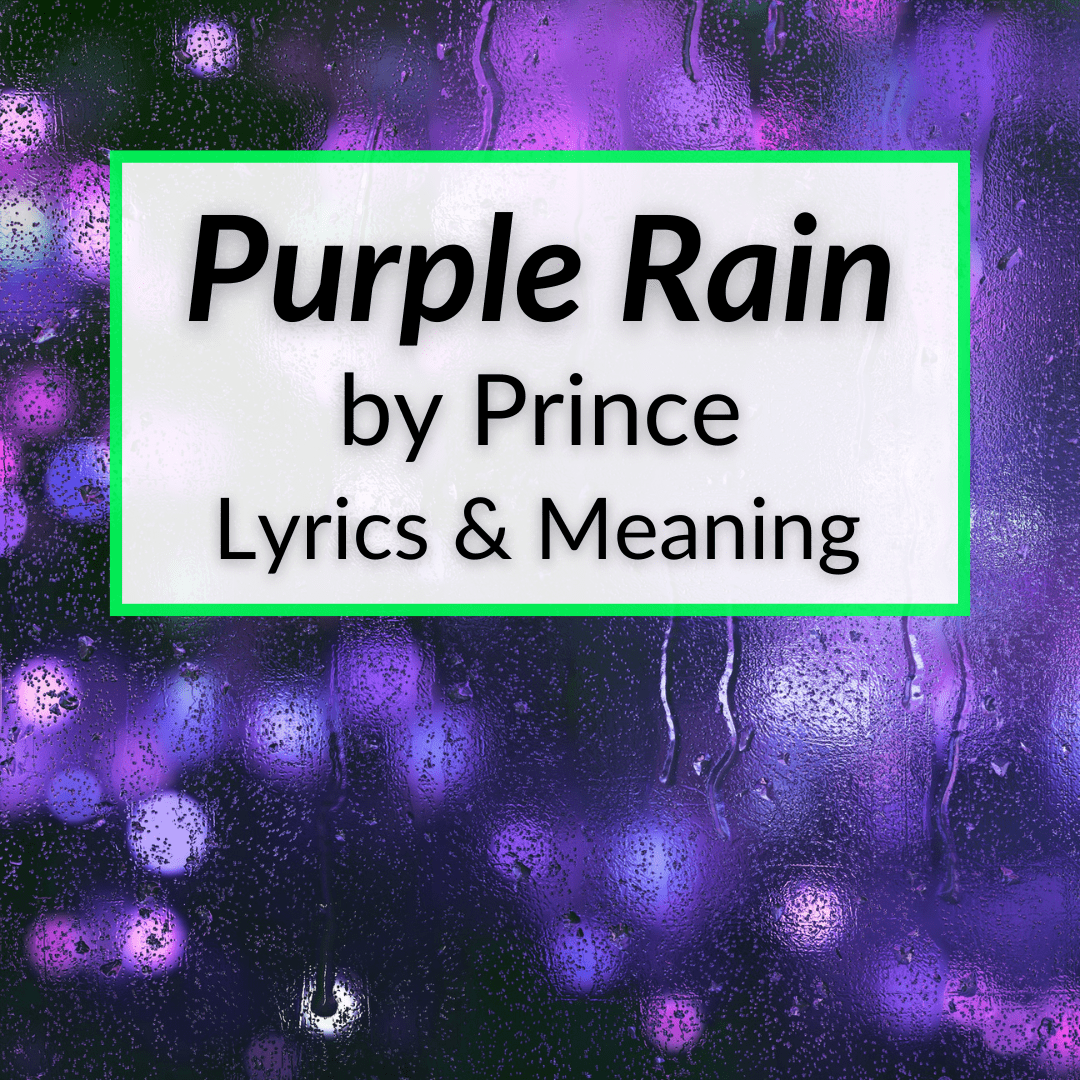 Prince and the Revolution performed a new song for the first time before an audience.

They had just found lyrics for the song a few days before.

A Record Plant mobile recording truck was out on First Avenue, like an undercover FBI van outside an Italian restaurant.

It was a benefit concert and it was being recorded with the intention of analyzing the material later.

If something good came out of it, great.

And something good did come out of it: Purple Rain.

Prince and his band nailed it and the Purple Rain went straight to record, with only a few minor tweaks.

But getting the lyrics to the song prior to the concert hadn’t been easy. Keep reading to learn how they came about and what they mean.

Purple Rain was one of Prince and the Revolution’s biggest hits. It reached number 2 on the Billboard Hot 100 when it was released and climbed back up to number 4 a few years ago after Prince’s death.

Rolling Stone ranked it number on their list of the 500 greatest songs of all time. Pretty amazing for a song that was recorded in one take the first time it was ever played live.

And a big reason it was such a success during that first performance was guitarist Wendy Melvoin. She is the one who added the guitar chords.

Those chords added a bit of madness and took the song from being a country song to the masterpiece it became. Incredible to think she was only 19 at the time of that first performance! And that it was also her first time playing live with the band!

During the concert, between songs, he would drop asides to his band: “You know, we are making history.” He was aware of the moment he was living. But was he similarly aware the last time he played it?

Purple Rain is an anthem, but it is also an epitaph. It was the last song performed (at least in public) by Prince before he died. That happened on April 14, 2016, at the Superbowl. He died a week later.

“One of the great successes we experienced was that we stopped being seen as just a black R&B band,” says the Revolution keyboardist Lisa Coleman, 36 years later.

“We had been struggling for a couple of years, trying to write a song for a black music network and another for a rock station. But Purple Rain, the song, was heard on all kinds of radio stations”, keyboardist Lisa Coleman recalled in interviews.

The song was born some expectations. The idea was to make a song that sounded country, even if it wasn’t 100 % country.

It was never meant to be the song that would make the artist and the group transcend time and space. And it wasn’t meant to be the theme song for the movie that later bore its name. At least not until that magical moment at First Avenue. Because the musical inspiration came with the melody, not with the lyrics, Prince needed someone to write the lyrics for him. So he sent a tape of a first acoustic recording to Stevie Nicks. Yes, none other than Stevie Nicks.

“Stevie, write me a lyric for this song”.

To this day, Stevie Nicks still has the acoustic demo recording of Purple Rain that Prince gave her, but she never did anything with it.

“I wouldn’t know where to start,” the Fleetwood Mac singer replied.

On the tape, Prince sang like someone who doesn’t want anything and wanted her to fill it out. Stevie Nicks recounted feeling afraid and overwhelmed when she heard the demo that Prince sent her.

She does not regret her decision to pass on the offer: “And I’m proud that I didn’t write the lyrics, because then he had to do it, and that’s how we have Purple Rain.”

That led Prince to play the song for his band during a day of rehearsal. They played around with it until it took on its final form and a masterpiece was born.

From a melody in Prince’s head to a song created during rehearsal, to a history-making live performance, to a rock anthem, to an epitaph.

What a journey! But what about those lyrics that Stevie passed on writing? What is the meaning behind the words that Prince and his band ended up adding to the music? Here are those lyrics in full. Below, we will dive into the meaning.

I only wanted to see you
Laughing in the purple rain

I never wanted to be your weekend lover
I only wanted to be some kind of friend, hey
Baby, I could never steal you from another

It’s such a shame our friendship had to end

Honey, I know, I know
I know times are changing
It’s time we all reach out
For something new, that means you, too
You say you want a leader
But you can’t seem to make up your mind

Basically, the song explains how to face the apocalypse, Armageddon, and the end of days.

When the rain of blood falls, when purple rain is dyeing the blue sky, and you can hear the despair of heaven, the only thing you can do is have someone you love by your side and hug him or her.

This is not an interpretation we just made on our own. This is what Prince himself explained about the meaning of the song:

“When there is blood in the sky, red and blue = purple, the Purple Rain belongs to the end of the world and be with the person you love and let your faith/god guide you through the Purple Rain.”

Prince never explained anything else. If you ask Lisa Coleman, the song symbolizes “a new beginning – purple is the sky at dawn. The rain is the cleaning factor.”

Once the song was written and recorded, Prince was concerned that it might sound like the song Faithfully from Journey. This illustrates how his aspirations were to transcend Rhythm & Blues, to always be something else.

Prince even met Jonathan Cain at his record company to have him listen to the song, so that he could let Prince know if it even remotely resembled Faithfully.

That song was off the Frontiers album (it was the second single from the LP), which was released a year earlier, the year Purple Rain was written.

Prince actually performed the song on guitar in front of Cain, he was so worried that two of the guitar arrangements could be interpreted as plagiarizing the Journey song.

Cain felt that the mere fact that Prince went to all this trouble to double check with him showed his good faith. Plus, he liked the song. In fact, he told Prince: “the song is going to be a big hit.” Journey gave their thumbs up, and the rest is history.

Purple Rain was a massive hit for Prince and the Revolution. Perhaps their biggest. Given the beginnings of the song, that is an especially impressive achievement.

The lyrics have left many guessing as to their meaning, but Prince himself has offered an explanation, so doesn’t it make sense to accept that explanation? We do.

Besides, the lyrics are not the most important component of this song. It would have been just as big a hit with different lyrics. Personally, I can’t help wonder what would have happened had Stevie Nicks accepted the challenge and penned lyrics for the tune.

If you liked this article, you may also like our breakdown of the lyrics to Take Me To Church and their meaning. The music video famously depicts a gay couple, and many accused Prince of being gay throughout his life.

Prince was saying the end of times is best spent together with the one you love. Our article on the Better Together lyrics meaning reveals that Jack Johnson says the same about every experience in life.

You should also take a look our analysis of the Iris lyrics meaning. The Goo Goo Dolls wrote this song for a movie that deals with an angel choosing a mortal life over an immortal one, in order to spend that life with the woman he loves.