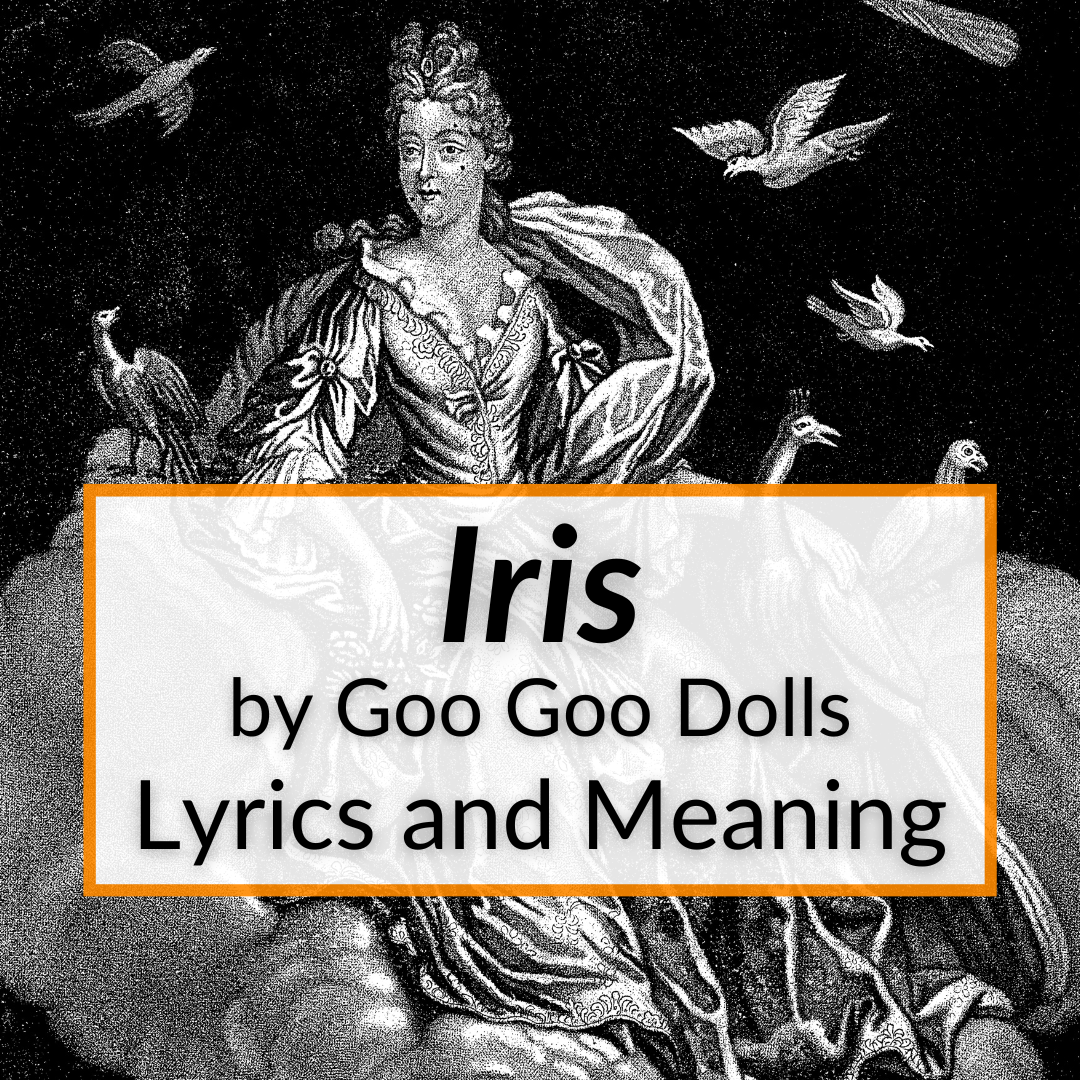 The song Iris by the Goo Goo Dolls was everywhere back in the late 90s.

It was far more popular than the movie whose soundtrack it anchored.

In fact, I still sometimes hear the song played today. No one talks about the movie anymore.

Nor should they. It wasn’t anything special.

But the song is great and it deserves the popularity it enjoyed.

But what exactly were the Goo Goo Dolls singing about, and did it have anything to do with the movie?

Keep reading for a complete rundown of the Iris lyrics meaning.

Iris was originally composed for the film City of Angels, starring Nicholas Cage and Meg Ryan, a remake of a much better German film Wings of Desire from 1987. Check that one out, if you can. It is a brilliant film.

The song was one of the main international hits of the 90s and has become a symbol of the American band. Melancholic and reflective, the song gained a romantic connotation, with lyrics that deal with the most realistic and sincere connections.

The plot of the feature focuses on Seth (Nicholas Cage), an angel responsible for taking care of the city of Los Angeles. When he falls in love with Maggie (Meg Ryan), he considers letting go of his heavenly aura to live a human life, so he can have a relationship with her.

To create the proper atmosphere for various scenes, the producers called on artists like U2, Alanis Morissette, Peter Gabriel, and the Goo Goo Dolls. The latter contributed the song Iris.

They were only too happy to do so. After all, working alongside such amazing artists would be a great story to tell your kids. Let’s look at the lyrics they wrote, before getting into their meaning below.

And all I can taste is this moment
And all I can breathe is your life
And sooner or later, it’s over
I just don’t wanna miss you tonight

And you can’t fight the tears that ain’t coming
Or the moment of truth in your lies
When everything feels like the movies
Yeah, you bleed just to know you’re alive

To enter into the context of the film, the lead singer and guitarist of the band, Johnny Rzeznik, was inspired by some personal challenges he was going through, as we will explain below.

Both in its composition and in the lyrics, Iris awakens a feeling of melancholy, which portrays a personal phase of the band’s vocalist. So, it’s as if the character in the song is trying to explain his flaws and be accepted for who he really is.

Some mishaps along the way led the band leader to compose lyrics that, even without saying it literally, deal with his fight against drug addiction, depression, and creative blocks.

The way he found to deal with this was an existential and more generalist approach. This worked out perfectly, since it related with the afflictions suffered by the protagonist of the film.

One of the first curiosities regarding this song is the origin of its name. The vocalist chose the title Iris when he found an article about country singer Iris DeMent.

Not only did the impact and strength of the name draw his attention, but also the association with the Greek mythological figure. The Greek Iris is a personification of the rainbow, who is the messenger of the gods. This also relates well to the film.

The first impression is that it is a love song, like a sincere declaration. We have a character who opens his heart and shows how important the loved one is to him.

Bringing it into the context of the film, we notice the references to the scenes from the first stanza, when the themes of eternity and paradise are mentioned. This makes perfect sense, given the plot in which an angel experiences its first sensations.

There is an allusion to paradise, which is always compared to a good feeling, of pleasure, of genuine happiness. But what makes the difference here is being close, the connection, and the feeling the love.

And all I can taste is this moment
And all I can breathe is your life
And sooner or later, it’s over
I just don’t wanna miss you tonight

One of the sensations that Iris conveys is that, everything is ephemeral in a way. That everything will pass. We need to hurry up and take the opportunity to live while there is still time. This extends to loving and being loved.

As the expression carpe diem (seize the day) says, it is the human connection that makes everything worth it. It makes it worth it to overcome difficult times. And having someone to share your experiences with makes the difference in a world that seems increasingly lonely.

Incidentally, loneliness is a very significant theme for the song. It has even been addressed by the Goo Goo Dolls in interviews when recalling the reasons why the song still receives so much love, even 20 years after its release.

They surmise that the music touches points of connection and proximity that we don’t have much nowadays. As a result, the song evokes nostalgia with hints of melancholy.

And you can’t fight the tears that ain’t coming
Or the moment of truth in your lies
When everything feels like the movies
Yeah, you bleed just to know you’re alive

Approaching a metalanguage, since the music was made for the film, we have a message more focused on the real experience. And real experiences can also hurt and cause pain.

We soon see that a relationship is not just made up of good times. Allowing pain to come is a way of not denying what you feel.

For fear of other people’s judgment, it is possible to understand that the character tries to camouflage his imperfections. Staying hidden is a way of preserving his essence. However, the intention is that only the loved one recognizes all the faults of the singer and that this does not prevent the construction of a future relationship.

Iris is a great song that first became famous due to its inclusion on the soundtrack of an average movie that, in typical Hollywood fashion, was a lesser remake of a great foreign film.

Unsurprisingly, the Goo Goo Dolls song end up being far more popular than the movie and it still enjoys its popularity today, while the movie has sunk into obscurity.

The lyrics deal with situations in the singer’s life, but do so in a way that they are also applicable to the situation of the main character in the movie. In the end, it is not the meaning of the lyrics itself, but the nostalgia the lyrics evoke, that is responsible for the song’s continued popularity.

Another song that deals with the choice between the pursuit of material wealth (or, in this case, eternal life) and a more fulfilling life is Led Zeppelin’s Stairway to Heaven. Read our analysis of the Stairway to Heaven lyrics and their meaning here.

In some ways, Iris is also about missing someone, in that the protagonist would miss his love so much, that he gives up an immortal life for her. See this way, it has something in common with one of Metallica’s biggest hits. See our dive into the lyrics to Nothing Else Matters and their meaning for more.