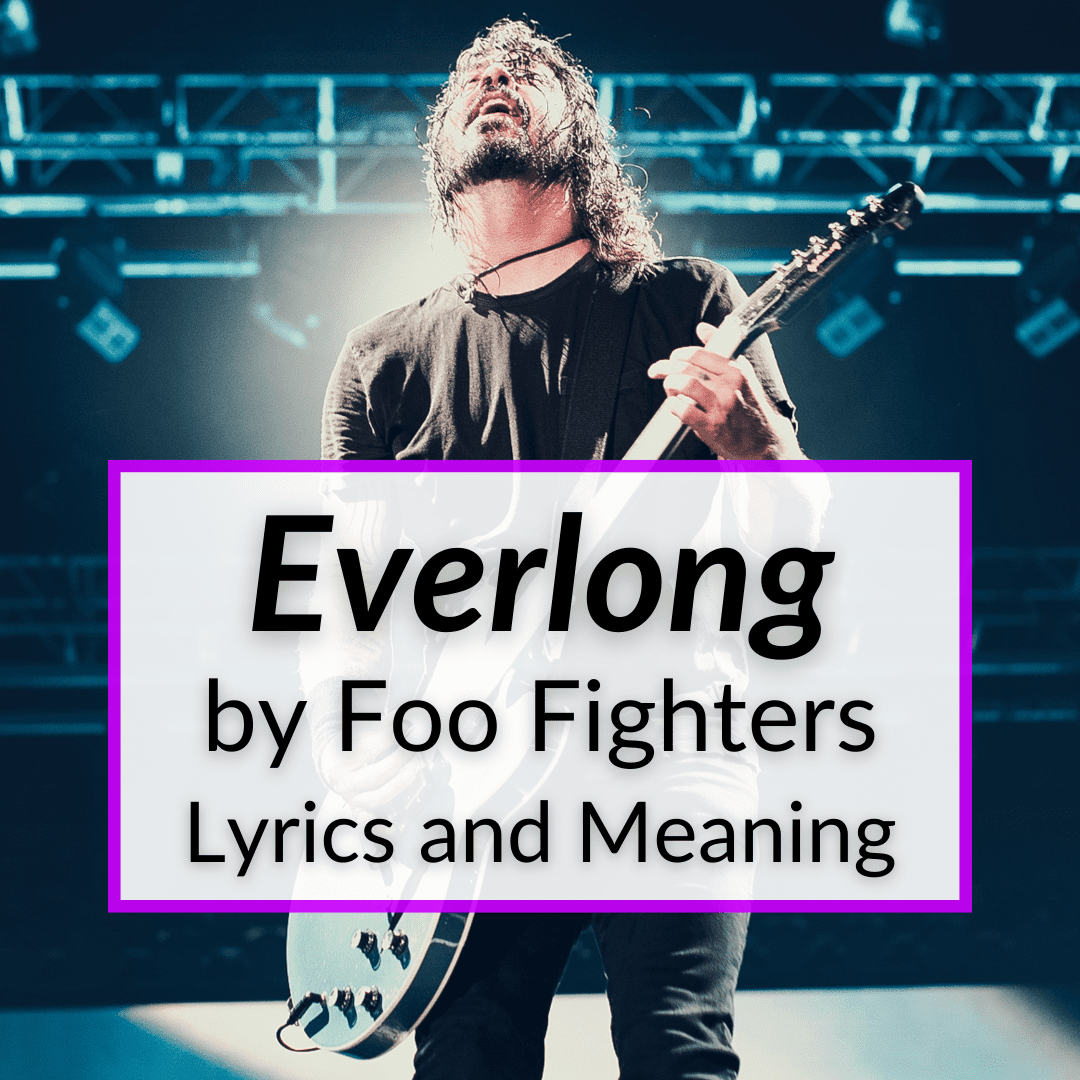 Many bands have one song that stands out from the rest of their catalog.

In fact, probably most bands do.

That one song does not necessarily stand out because it is better. That is subjective and a matter of debate.

Instead, that song has something undefinable that elevates it to a hallmark of the artist in question.

In the case of the Foo Fighters, that song is Everlong. No question.

It is the one song of theirs everyone recognizes. The song that has come to define them.

But not many know what Dave Grohl is actually singing about.

Keep reading for the complete lyrics to Everlong and a discussion of their meaning.

Everlong might be Foo Fighters’ biggest hit, but that does not mean it is everyone’s favorite song. Every fan will have their own favorite track.

But the legacy that this single has left behind since its release in 1997 as part of the album The Color And The Shape is undeniable. There is a reason it was the closing song of Foo Fighters shows.

But before it ever achieved any success, before it was even recorded, the song has an interesting story about its conception.

Dave Grohl actually revealed that it almost wasn’t even included in the final cut of the album. It was only due to the intervention of the members of Sonic Youth that it made the cut.

And that’s only a taste of what that hides in the story behind the song. We’ll reveal more of that story below, along with the meaning behind the lyrics to Everlong. Before that, here is the music video and the lyrics in full.

Hello, I’ve waited here for you
Everlong
Tonight, I throw myself into
And out of the red
Out of her head, she sang

Come down, and waste away with me
Down with me
Slow, how you wanted it to be
I’m over my head
Out of her head, she sang

Breathe out, so I can breathe you in
Hold you in
And now I know you’ve always been
Out of your head
Out of my head I sang

If there’s one thing we can say about Dave Grohl throughout his career, it’s that he’s a resilient guy. There are many examples of his resiliency.

Perhaps the clearest is that, after the death of Kurt Cobain, he sought a way to continue his own path in music. And he did it big.

But as often happens with great bands, it is not just good times. Foo Fighters, despite all the seeming good vibes and positivity we usually see from the band, also went through a murky stage.

In fact, this happened in the middle of the recording of The Color And The Shape, between 1996 and 1997. At the time, tensions between the members of Foo Fighters were high, regarding the recording of the album. Dave Grohl’s personal life was also complicated. The vocalist had separated from his then-wife Jennifer Youngblood (whom he would divorce definitively in 1997).

“We recorded in a studio outside of Seattle that was a converted barn and you could stay there. Behind it was this creek that had salmon jumping in it. It was very beautiful but we were quite isolated, about 45 minutes outside of the city. So I stayed in that place and while I was there my ex-wife and I parted ways,” he told Kerrang in an interview.

In December 1996, the band decided to take a Christmas vacation and Dave went to visit his family in Virginia City. He took some of the demos they had recorded with him, to see what he could add, take away, refine or modify.

Inspiration From A New Romance

Although things were not going well with his marriage and he and his wife were basically over, he was actually in love with someone else already. Dave confirmed this in the same chat with Kerrang, although he never revealed the identity of that person.

“That song is about a girl that I had fallen in love with and basically it is about being so connected with someone, that you not only love them physically and spiritually, but when you sing together with that person, you harmonize perfectly,” said the vocalist of the Foo Fighters.

As mentioned, Dave has never revealed who this mysterious girl was, but the general conclusion is that it was Louise Post, one of the singers of the band Veruca Salt.

Of course, that romance did not prosper, but the rumor is that Post herself contributed vocals to Everlong (although she does not receive credits on the album track).

Dave Grohl has talked a bit about how the riff and the music for the song came about. It turns out that, while he was trying different chords, he played a very special one that caught his attention. That same chord is the one that opens the song.

“The first thing I thought when playing it was ‘That sounds a bit like Sonic Youth’. One of my favorite bands of all time is Sonic Youth and I thought it was a big deal,” Dave said.

Once he was in Virginia around Christmas of 1996, Dave Grohl went to a friend’s studio to record a demo, so as not to forget the composition he was already putting together.

Once he had his recording ready, it was time to show it to the rest of the Foo Fighters and producer Gil Norton. Of course, the other guys liked the song but it still had to pass one more filter for Dave to be convinced.

Dave Grohl recalls playing the demo for Sonic Youth, specifically for Thurston Moore and Kim Gordon. He was afraid that he had stolen something from their songs. He asked them to “listen to the thing I recorded.”

He explains: “they said ‘Why is it a demo? Why isn’t it on the album?’ So I went with the band, we recorded it and now it’s the song you hear on the radio.”

At the end of Everlong, there is a small instrumental part where you can hear Dave Grohl whispering something almost impossible to understand.

According to the band, there are three separate vocal tracks on the song: one is a “love letter”, one is a “technical manual” and one is “the story of a studio technician’s father”. Each of them is on a channel: left, center and right.

Here is what the father’s story says:

“So Dad would take the Sundays off,
And that’s the only time he could ever get any rest,
And so, because we were loud on Sundays,
He’d make us hold his construction boots over our head, till he’d sleep
And they were really heavy boots
I’d used to say dad come on, please,
Like start crying, ‘cause they’re too heavy.”

Everlong has found a new audience in recent years, thanks to Dave Grohl’s “drum battle” with 11 year old Nandi Bushnell on YouTube. But the Foo Fighters hit never really went away.

You could hear the song played in various bars, restaurants, or other venues around the world, ever since it was first released. And deservedly so. It is a true rock anthem.

The meaning of the lyrics is pretty straightforward, with the only mystery being the identity of the woman to whom Grohl was singing. But it seems pretty well established that it was Louise Post.

If you enjoyed this article, you may also like our in depth look at the lyrics and meaning to Take Me To Church. Dave Grohl has been a longtime supporter of gay marriage, and that song by Hozier takes the catholic church to task for its views on gays.

Everlong is the Foo Fighters’ signature song For another signature song, check out our breakdown of the lyrics and meaning of I Want It That Way by the Backstreet Boys.

Another huge band with a signature song about the dissolution of a relationship, and in this case about the singer coming to grips with his bisexuality, comes from Queen. Read our analysis of the Bohemian Rhapsody lyrics meaning for more.