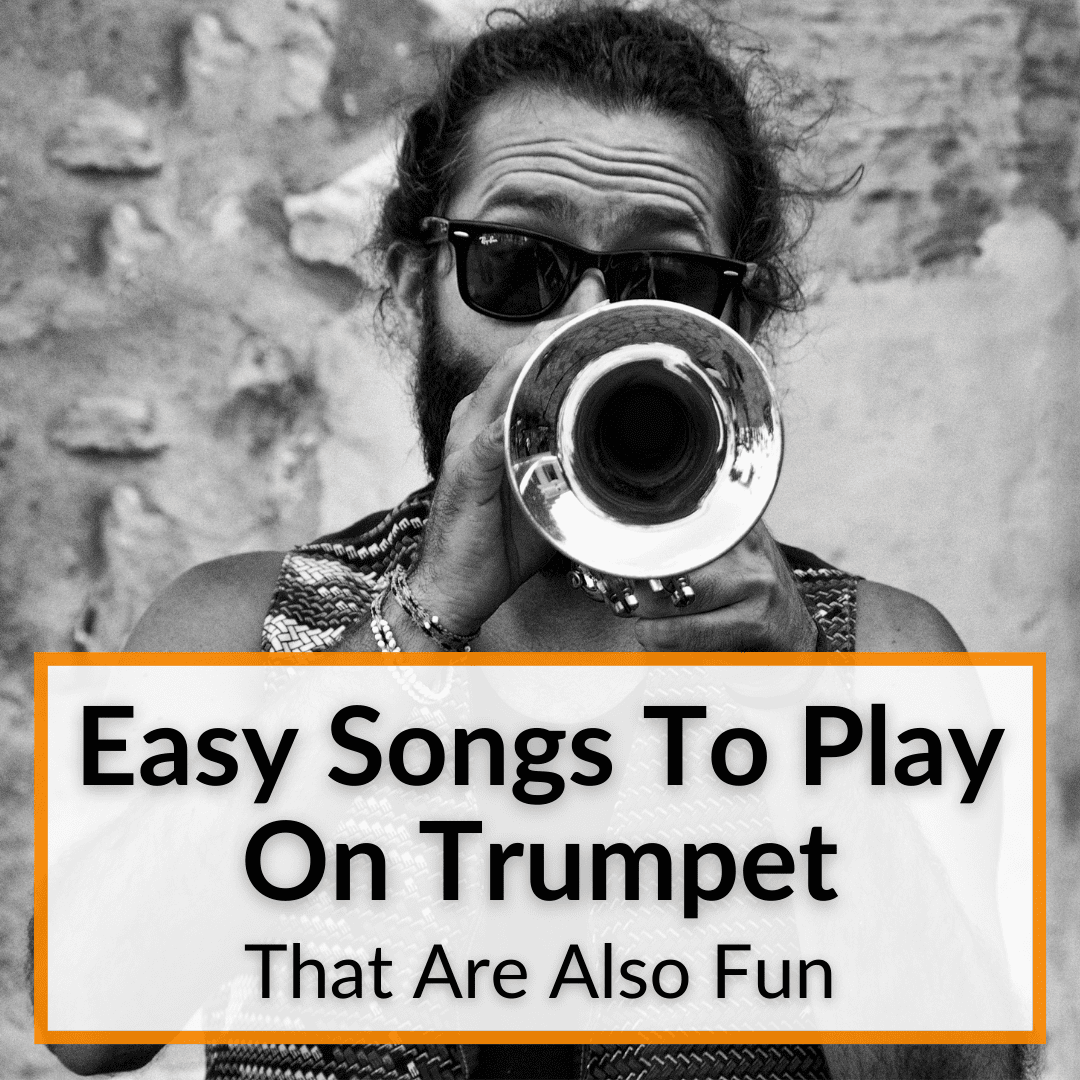 What do you need more than anything when you first start playing the trumpet?

And that means easy songs to play on the trumpet that are also fun to play.

It’s not always easy to figure out which songs are easy to play and which are challenging.

Many seem easy, but end up being the opposite.

But there are a number of wonderful tunes that fit the bill. You just need to know what they are.

Keep reading for 7 great songs that are both fun and easy to play. Then break out your best trumpet and start practicing!

Fun Songs To Play On Trumpet

What A Wonderful World by Louis Armstrong

Louis Armstrong is a jazz innovator, unique trumpet player, singer, soloist, composer, bandleader, entertainer, and jazz educator. He also features on our list of the best trumpet solos of all time.

His contribution to American, and world, culture is immeasurable. The sound of his trumpet and his unique, expressive vocals, and scat improvisations were known and recognized all over the world.

With his performance and behavior, he broke down everything, even racist barriers, and became the first black superstar. Because of his planetary popularity, he was called the American ambassador of jazz.

As “Ambassador Satch”, he participated in numerous tours that had a political character during the Cold War.

Armstrong is listed in the Guinness Book of Records as the oldest performer to take first place on the charts after his performance of the song Hello Dolly unexpectedly knocked the Beatles out of first place.

And seventeen years after his death, thanks to the inclusion of a performance of What a Wonderful World in the 1987 film Good Morning Vietnam, he won the hearts of the younger generation.

The song not only transmitted a universal anti-war message (it was recorded during the war in Vietnam) but also had beautiful lyrics and melodies that are well-known to everyone even today.

It is a slow-paced song written for trumpets in the key of G Major and has a range from D4 to E5. It is a beautiful melody that is quite easy to play.

Love Me Tender by Elvis Presley

The King of Rock and Roll! Elvis began performing live in 1955 at clubs in Arkansas, Louisiana, and Texas and was named ‘The King Of Western Bop’ and ‘The Hillibilly Cat’ after his first performances.

The reaction of the audience was fanatical. They loved the combination of exceptional singing, a special way of playing, and semi-erotic performances.

His performances are still remembered today, mostly because he was the first to introduce singing combined with movement of the hips, falling on his knees during key sections of the song, etc.

There was hysteria for Elvis all over the world, which inevitably led to the shooting of the first film based on Presley’s hit Love Me Tender. The film received mixed, or rather controversial, reviews, but it achieved commercial success. It was seen in cinemas across America for 5 weeks.

Contrary to his famously energetic songs, Love me Tender is a beautiful ballad. It is an adaptation of a Civil War song Aura Lea composed by George Poulton. As a ballad, it is a moderately slow song in tempo, and therefore quite easy to play technically. Not only that, all the notes are in one octave, too.

Smoke On The Water by Deep Purple

The song Smoke on the Water entered the list of the 500 best songs of all time, as well as the list of 100 songs that changed the world.

The guys from the band didn’t think that this song would become a hit and they rarely played it at performances. However, when they recorded it as a single for the United States a year later, the song received the attention and fame that still accompany it today.

The guys from the band Deep Purple watched an entire casino burn from the terrace of a nearby restaurant. They watched the fire go out and a layer of smoke covered Lake Geneva.

That’s when bassist Roger Glover came up with the idea to write a song that would be called Smoke on the Water, and Ian Gillan quickly wrote a text about what it was like to record the album Machine Head.

The band was moved to the Grand Hotel in Montreux and they managed to record an album there, using the Rolling Stones portable studio. They used Gillan’s lyrics and Richie Blackmore played a riff that is still unofficially considered the best guitar riff of all time.

Much like Love me Tender, this song is quite easy to play due to repetitive melodies in 4/4 rhythm, but also due to the G minor key in which it is written. On the other side, the tempo is a bit faster and there is a solo section that might require a bit of practice if you want to nail it.

My Heart Will Go On by Celine Dion

After 20 years at the Billboard music awards, Celine Dion sang the famous song My Heart Will Go On, which became like her ID card after the incredible popularity of the movie Titanic.

However, Celine actually did not want to sing that song, but entered the studio at the urging of her husband Rene, who passed away in January 2016.

Also, the director of Titanic, the famous James Cameron, was against the title track of the film being a ballad, explicit in his decision not to want a pop song.

In 1998, the film Titanic won the Oscar for best song, and a year later, numerous prestigious awards followed.

Even though it became this timeless love song that made Celine Dion popular, she hates performing it these days. But many others don’t, since it is a beautiful song with a beautiful melody.

This song might be trickier to play technically than the first two on the list, especially due to advanced air control in the refrain. But as it is a slow-tempo song in G Major (much like What A Wonderful World), it can be played on a trumpet with little practice.

This is one of the most beautiful movie scores ever written. The song was first presented as an instrumental theme in the first part of The Godfather trilogy, and everyone called it the Love theme from The Godfather.

When the movie The Godfather was being filmed in 1972, the director Francis Ford Coppola insisted Nino Rota be called to ensure that the film had authentic Italian music. Nino succeeded. He composed 3 beautiful themes – The Godfather Waltz, Michael’s Theme, and The Love Theme.

A repeating trumpet motif of The Love Theme, one of the finest pieces Rota has ever written, opens the film and sets the tone of the entire film. It is performed by the mandolin, with a miraculous Italian sensibility.

Of course, it was later adapted into a song, with numerous artists providing their interpretations on many different instruments.

The most popular version of this song was performed by singer Andy Williams under the name Speak Softly Love, which managed to reach the 34th place on Billboard’s Hot 100 list.

This is another composition on this list that is quite slow in tempo (around 70 beats per minute) and therefore quite playable on the trumpet.

The key is in C# Major but the composition has a broader range of notes than most of the previous picks on the list. Be that as it may, if you have played the trumpet before, this one will be quite satisfying to learn.

Often called a musical giant and innovator, Beethoven wrote visionary music by which he expanded not only its boundaries, but also the boundaries of the man himself, and thus created the magnificent heritage of humanity.

In the symphonies, he changes the existing classical structure, introduces equality among the strings, gives independence to the violas and cello over the double bass. He performs individualization in wind instruments and introduces trombones into the orchestra.

The crown of all symphonies is certainly the 9th Symphony, which marks a complete exit from the classical symphonic framework and presents a challenge to performers and all composers who later composed symphonies. Richard Wagner called it “the pinnacle of music.”

Even his youth, Beethoven was fascinated by the verses of Schiller’s poem Ode to Joy and wanted to incorporate them into his music. It was in the 9th Symphony that he introduced the word, or human voice, for the first time, using an excerpt from Schiller’s Ode to Joy.

This symphony is a fusion of poetry, music, philosophy, and moral message to humanity and gives the possibility of interpretation on several levels. Listening to it, we enter a new world and let our imagination guide us through the expanses of music.

The final part of Ode to Joy is played in 4/4 rhythm and has one octave. It actually became an official anthem of the European Union.

Stand By Me by Ben E. King

It was a sad day when the great soul singer Ben E. King left this world in 2015, because it meant we would never get to hear more of his beautiful songs. Still, music lovers will always remember the timeless hit Stand By Me.

The song is now part of the Rock and Roll Hall of Fame as one of the 500 songs that shaped the rock and roll sound. In 1999, Stand By Me received the status of the fourth most performed song of the 20th century, with over 7 million performances!

Naturally, it has been interpreted by many artists, such as Lady Gaga, Sting, Tracy Chapman, John Lennon, Imagine Dragons, and many more.

On trumpet, it was originally written in the key of F Major but could be played in B major and G# minor. The tonal range goes from G3 to E5, and the temp is around 75 bpm. It is not the easiest song on this list to learn as a beginner on trumpet, but it is quite easy if you have played trumpet for a while.

Some of the fun songs to play on trumpet listed above are more difficult than others, but none are overly challenging. Even as a beginner, you should be able to play them fairly well, if you put in enough practice time.

Do you agree that these songs are not too difficult, or do you find any of them too challenging? Are there any other easy songs to play on trumpet that you feel should have been included? Please let us know in the comments below!