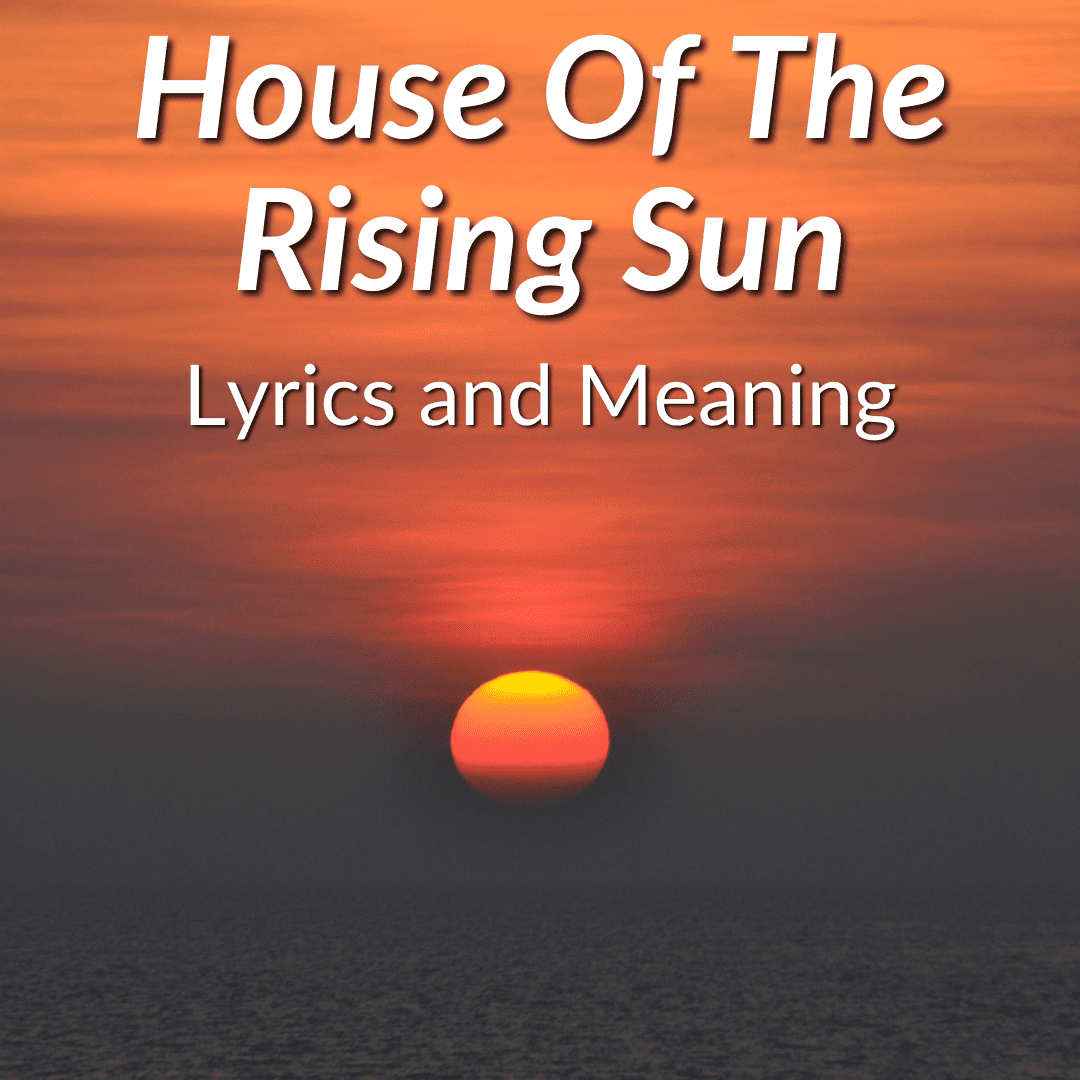 Quick, name an artist who has not covered House of the Rising Sun.

Ok, so there are a lot of them.

But the point is, it can seem like just about every musician out there as done a version of it.

Many of those versions are great songs, with the one by The Animals leading the way.

It is the most famous and most popular one.

But none of the people singing this song wrote the lyrics.

In fact, we don’t know who wrote them, or what they were writing about exactly.

But we do have a good idea as to the meaning. Keep reading for the full lyrics to House of the Rising Sun and an analysis of their meaning.

House Of The Rising Sun is a traditional American folk song. It is sometimes also called Rising Sun Blues. It tackles a life story gone wrong in New Orleans.

Like many other folk classics, we don’t actually know who the composer was. Many stories say that it was inspired by English music from the 16th or 17th century.

Others posit that it may reference a decorative sunburst insignia dating from the time of Louis XIV. That insignia was brought to the United States by French immigrants.

There are reports of the song being sung by miners as early as the year 1905, but it was not recorded in the studio until the year 1933 (still under the name “Rising Sun Blues”) by Clarence “Tom” Ashley and Gwen Foster.

Ashley says he learned it from his grandfather, which means the song actually dates back to long before the 1930s. The next recording of this song dates from 1937. That version was sung by Georgia Turner, the daughter of a miner in Kentucky. It was called The Rising Sun Blues.

A few years later in 1947, Josh White recorded a version adding his own words. His additions would be used a lot in the 60’s versions, which are the ones that eventually became the most famous.

This version by White was released on Mercury Records in 1950. The song began to become popular with big names in American music.

Glenn Yarbrough recorded it in 1957 on the Elektra Records label, and Pete Seeger did the same on the Folkways Records label a year later. Frankie Laine recorded a version with the name New Orleans in 1959. Between 1959 and 1960, various artists recorded versions under different names.

But it was in mid-1961 that a world-famous artist played The House Of The Rising Sun for the first time. That artist was Bob Dylan, who recorded it for his first album, which came out in March 1962.

There were no credits for the song, but a note said that Dylan had been taught how to play this song by Dave Van Ronk.

In 1964, The Animals recorded the version that became the most famous of all and that is the one most people know today. Eric Burdon said he first heard it sung by Johnny Handle in his hometown of Newcastle, England.

Their version was much praised by Bob Dylan himself. It narrates the point of view of a man (instead of a woman as in many previous versions) who lived a bad life and had a father who was always gambling and drinking too much (unlike the previous versions in which he was reported as a good person).

The Animals’ version was very well received and became a transatlantic hit in the 1960s. It reached the top of the English charts in July 1964, and the top of the North American charts two months later. It stayed for 3 weeks and was part of the first “British invasion” along with the Beatles.

The song gained another famous version in the 1960s when Frijid Pink, a band from Detroit, recorded it in 1969. They used a different tempo than The Animals, but retained the use of guitar distortion and frenetic drums. Frijid Pink’s single was certified gold in the United States and was successful in several European countries, too.

Other bands have recorded versions of this song over the years. It has inspired many artists. For example, Noel Gallagher of the band Oasis said it was the first song he learned to play on the guitar.

But it was primarily the Animals who made the song House of the Rising Sun famous in the sixties, through the powerful voice of Eric Burdon. They made it one of the most iconic songs in folk-rock — a timeless anthem that denounces the dangers and temptations that the youth can face.

No matter which version you prefer, or even if you do not like the song at all, you can’t help but respect the story of a song that will forever be on radio stations and playlists around the world.

Before we dive deeper into the meaning of this great hit, here are the full lyrics and a video of The Animals performing their version.

House Of The Rising Sun Lyrics

There is a house in New Orleans
They call the Rising Sun
And it’s been the ruin of many a poor boy
And God, I know I’m one

Oh, mother, tell your children
Not to do what I have done
Spend your lives in sin and misery
In the House of the Rising Sun

Well, I got one foot on the platform
The other foot on the train
I’m goin’ back to New Orleans
To wear that ball and chain

Well, there is a house in New Orleans
They call the Rising Sun
And it’s been the ruin of many a poor boy
And God, I know I’m one

House Of The Rising Sun Meaning

The story narrated in this song tells us about a house known as The Rising Sun where the vices of alcohol, gambling, and prostitution are common. As might be expected, this house has been the downfall of many naive young people.

The song is sung in the first person and the interpreter narrates his own tragic experience, in an attempt to warn parents and children about the pain that this house can cause. Once it has corrupted you, there is no going back.

The strength of this song lies in the timelessness of its story, whose message makes us reflect and realize that every boy will reach a time in his life when he will be tempted by the lowest vices of humanity. If he is not cautious, he will end up being enslaved by these vices, as happened to the storyteller.

House of the Rising Sun does not have a known author and many artists have sung the song. This is where we find one of the most interesting aspects, since it has lent itself to being reinvented.

This change in the gender of the narrator gives a complete twist to the meaning of the story and the events it tells. It makes it much darker.

A story of lost innocence is different for a man, where it is about becoming a slave of his own desires. For a woman it implies being enslaved by other human beings.

The dramatic force is greater from this point of view, and this is how other singers, such as Bob Dylan and Woodie Guthrie, understood it. They interpreted it in this way without caring about being men themselves. Even Dolly Parton decided to add a few more paragraphs to exalt the feeling of oppression of women by men.

Some have tried to find the location of the brothel that inspired House of the Rising Sun. However, most agree that it is an allegory about the vices that these types of places represent.

What is certain is that House of the Rising Sun is a sentimental and dramatic song, with a powerful message about the need for children to be guided by their mothers and fathers. Its success lies in the fact that, at some point in our lives, we will all be able to identify ourselves in one of these two roles.

Whoever wrote House of the Rising Sun, they created a timeless classic that will probably continue to see artists do their own versions of it far into the future. And I, for one, can’t wait to hear more of them.

Most people still prefer the version by The Animals, and I agree. But that does not mean that someone can’t come along one day soon and release an even better version.

The reference to New Orleans connects this song to the southern US, even though the band is from England. Of course, we all know the biggest southern rock hit of all time. We also dissect the lyrics and meaning of Sweet Home Alabama. Its lyrics are quite controversial.

Another controversial song that also suffered accusations of racism, in this case due to cultural appropriation before that was even a phrase, comes fro Ram Jam. They did not write it, but reimagined it. See our article covering the meaning of the lyrics to Black Betty for more.