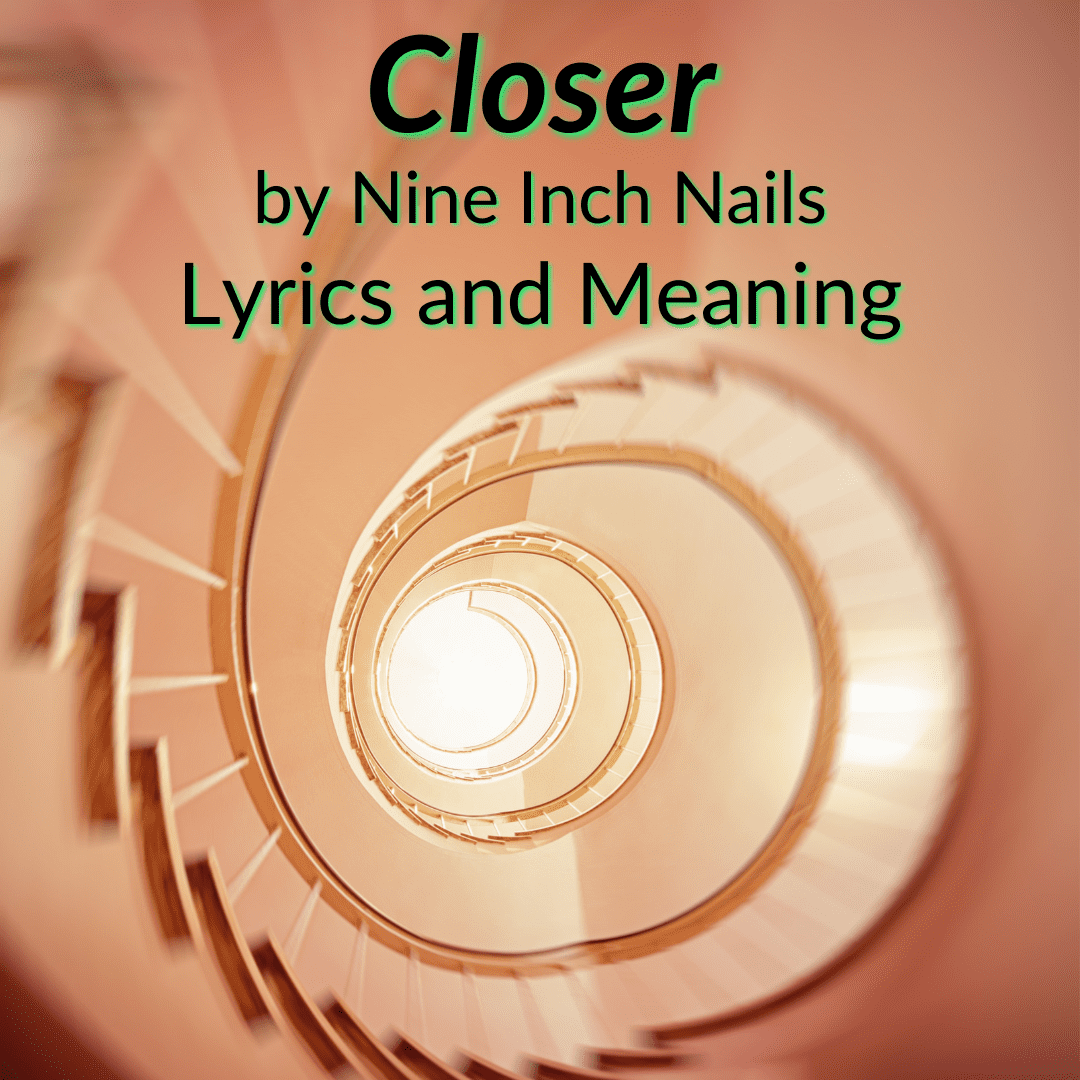 If you’re searching for the meaning of Closer by Nine Inch Nails, you’re surely already aware of the crude lyrics.

But if you somehow stumbled here by accident and you’re easily offended, you’re probably better off not knowing the lyrics to this song.

Although the songwriter Trent Reznor did not have quite as vulgar a meaning in mind as many fans have ascribed to the lyrics.

So what was Reznor trying to say in Nine Inch Nails’ biggest hit?

Keep reading to find out. Were going to do a deep dive into the Closer lyrics meaning.

Closer by Nine Inch Nails was released in May of 1994 on their second album, Downward Spiral. It has become their signature song and their most popular hit. It was also released as a single, but was called Closer to God.

Trent Reznor, the lead vocalist for Nine Inch Nails wrote the song and its release was an almost instant hit with the industrial and alternative rock crowds. But Trent Reznor was disappointed by the listeners’ interpretation of the song.

Let’s take a look at the lyrics in full. What do you get out of them? After the lyrics, we’ll get into the actual meaning of the song.

While the lyrics to Closer are crude and direct, the song was written to address obsession and self-hatred. Instead, many fans took the words at face value and deemed Closer a sex song.

Some went even further to say it describes rape or the thoughts going through a rapist’s head. Reznor and Nine Inch Nails declined these claims. Let’s take a closer look and decide for ourselves.

The opening of “Closer” clearly references sex. The lyrics speak to a need or desperation. Many people have interpreted this as sexual frustration or lack of sexual release.

However, it can also show an obsession with a person (sexually or otherwise). He needs this person; he wants this person. He is all consumed by this woman.

This line is repeated throughout the song and is the primary argument Nine Inch Nails fans had for saying Closer was a song all about having crazy sex.

But if viewed through the lens of Reznor’s explanation for the song as being about self-hatred and obsession, this line could speak to a lack of connection.

He is tempted by instinct and wants to have emotionless sex. He is not capable of having an emotional connection with a woman and instead releases his feelings through sex. He doesn’t like himself and wants to forget reality in moments of pleasure.

It can also refer to being at rock bottom. He is severely depressed and sex is his last link to humanity. He has lost all other forms of self and has been broken down to reacting only to basic instincts. Taken literally, he sees himself as an animal and not a human.

(Help me) you make me perfect
Help me become somebody else

These lines directly correspond to feelings of self-hatred. He is looking for someone to help him change, someone that makes him a better person. He wants to be pulled out of the depressing state he is in.

In some way, sex gives him purpose or a feeling of being alive. He wants to become a person someone would have a relationship with or want to be with, not just sleep with based on lust. This interpretation is corroborated by the line, “You are the reason I stay alive.”

You bring me closer to God

This is about finding power (and maybe a sense of self/identity) through sex. Having sex with the woman he is obsessed with gives him strength or a feeling of invincibility. It is the only thing that makes him feel good.

Closer As Part Of Downward Spiral

The purpose of the album was to describe a man’s descent into madness due to depression and self-hatred. Taken from this perspective, Closer could be about a man having sex to cure (or at least disrupt) his depression.

Since its release, most people have taken Closer by Nine Inch Nails to be a song about having wild, crazy sex. While that is a part of it, the sex is not the point of the song. Nor is obsession, which is also a part of it.

It is the depression that the protagonist is trying to momentarily forget through sex that is the real point. As such, the song fits nicely into the overall narrative of the album Downward Spiral.

Another song about a very dysfunctional relationship (or, more accurately, a very one-side one) comes from The Police. Read our analysis of the lyrics and meaning of Every Breath You Take for more on that.

A much more innocent song about sex comes from Madonna (who has always denied the song is about sex). See our look at the Like a Prayer lyrics and meaning for more.